We are warning that new safety proposals, designed to reduce the risk of potentially deadly fridge and freezer fires, have a 'gaping hole' in them.

We have been lobbying for five years for all new refrigeration and freezing appliances to have a fully fire resistant backing as standard but the current proposals would still allow a large hole at the back of the fridge or freezer which would leave the highly flammable insulation inside exposed.

The doors and side panels of most fridges and freezers are usually covered in metal but many still use a flammable plastic backing, which offers very little protection against the foam inside catching alight if a fire starts.

Key UK players in the fridge and freezer industry are due to put their final safety proposals forward to the International Electrotechnical Commission (IEC), the body that sets the global standards for the manufacture of fridges and freezers.

The deadline for amendments to those proposals is imminent but we fear unless UK manufacturers and other industry bodies ensure the proposals are fit for purpose, a key opportunity to ensure fridges and freezers are made to a higher safety standard will be lost.

We are calling for the change as part of our Total Recalls campaign, which aims to reduce the number of fire deaths and injuries caused by fires involving white goods. 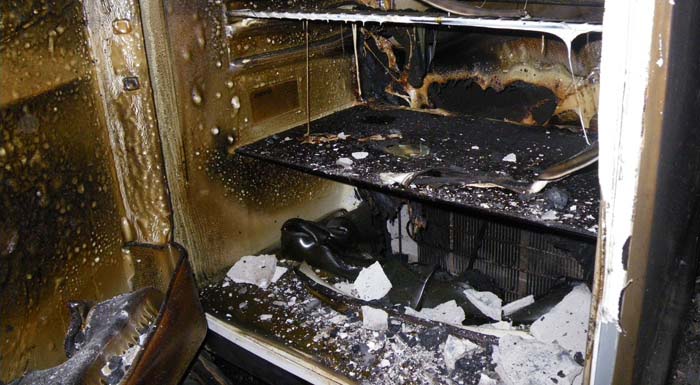 On average, there is one fire a day involving white goods in the capital and since 2011 there have been eight deaths – including one incident in Neasden where six people  tragically lost their lives - and around 120 injuries, as a result of fires originating in refrigeration and freezing appliances.

Assistant Commissioner for Fire Safety Dan Daly said: "Partially covering the back of a fridge is like having a fire door with a hole in it that would allow fire, heat and smoke to pass through.

"The UK fridge and freezer industry has a real chance to influence the international body that sets the manufacturing standards for refrigeration and freezing appliances worldwide but there is literally a huge hole in their latest proposals.

"While most fridges and freezers work safely for years, they are potentially the most dangerous appliance in the home if they are involved in a blaze because they contain so many flammable materials. They are also one of the few electrical items to be always left on when you are sleeping."

We have written to UK fridge and freezer industry representatives calling on them to urgently review their proposals so they don't compromise public safety. Currently they still allow for a large area of the highly flammable insulation foam inside to be unprotected from flames.

This is partly to allow for the hoses and wires that power the appliance but the Brigade believes the hole could be covered in a way that would not leave any insulation exposed.

If you think there may be a problem with any of your refrigeration appliances our advice is to always unplug it and to contact the manufacturer or a qualified repair technician.

Also ensure you have a smoke alarm, check regularly that it works and plan how you would get out in the event of a fire.

Shocking footage filmed by the Brigade at the BRE testing facility clearly shows the dangers of having a fridge or freezer with a flammable plastic backing.

In a controlled  burn test the plastic backed  fridge freezer was well alight after just 90 seconds and had to be extinguished after just two and a half minutes as the fire was starting to overwhelm the testing room, while the fire set in the metal backed appliance, never really took hold, and burned for about 20 minutes before self extinguishing.

Our Total Recalls campaign is calling for several changes to the recalls system, including the development of a single recall register.

Many people have white goods, such as fridges and freezers, in their home that are switched on all the time.

Most fires caused by these appliances are not down to human factors but are caused by faults beyond the control of the householder.

Even when these products aren't the cause of the blaze they can still make fires worse due to the insulation used in their design being highly flammable and a major source of fuel.

We are calling for the government, manufacturers and retailers to make changes that will make people safer.