Last week a blaze ripped through an 18 storey high rise. It took 120 firefighters to put it out. Our fire investigators believe it was caused by a faulty Indesit tumble dryer which was subject to ‘corrective action’ by the manufacturer. It was due to be seen by an engineer.

Find out if your tumble dryer is subject to a product recall or safety notice. If it is our advice is to immediately stop using it.

What we want from Whirlpool

After this devastating fire we now want the Indesit’s parent company, Whirlpool, to change their current advice to consumers as a matter of urgency. Their advice is:

”You may continue to use your tumble dryer whilst waiting for the modification, however, we require that you do not leave your dryer unattended during operation as an extra precaution (i.e. do not leave the house or leave the dryer on whilst asleep).”

We want  this change because we attend nearly one fire a day involving white goods. While there is a fire risk people should not use their appliance until it has been checked and repaired.

1. The safety notice was issued due to the danger of fire and any fire has the potential to endanger life and property.

2. It’s impractical for most people to remain with an appliance for the duration of a drying cycle.

3. If the dryer does catch fire while it’s attended this still presents a risk to the occupants.

4. If the owner attempts to put out a fire in an appliance they could be putting their life at risk. The Brigade’s advice is to not risk tackling the fire, always raise the alarm, get out, stay out and call 999.

5. The time a fire may break out because of a fault is unpredictable. The ignition of fluff accumulated around a heating element may cause a smouldering fire which might not be discovered until the appliance has finished being used and the owner has gone to bed. 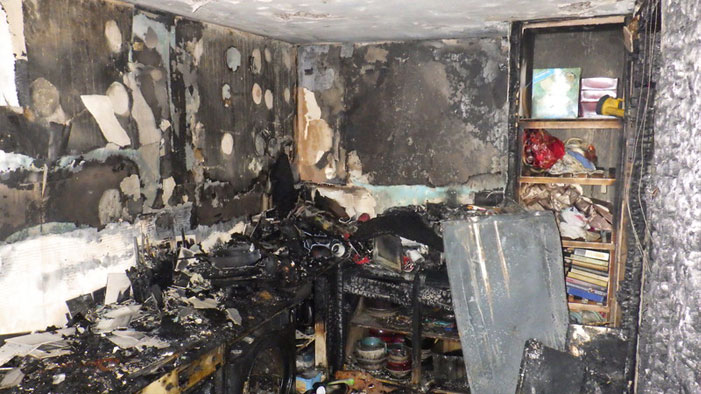 It started in the kitchen

Friday’s blaze started in the kitchen of a seventh floor flat and the occupants were in at the time and using their tumble dryer. Thankfully they were uninjured and escaped smoke coming from the dryer. The residents of four other flats in the block have also had to be rehoused following the blaze.

London Fire Commissioner Ron Dobson said: ”If my kitchen had one of the recalled goods in it, I would unplug it straight away until  it has been checked and repaired. The speed with which the fire took hold shows how dangerous a faulty tumble dryer can be that’s why we are calling for Whirlpool to urgently change their advice to consumers.

“The flat’s occupants had a terrifying ordeal. The kitchen quickly became smoke logged and thankfully they noticed the smoke and quickly left the flat and called the Brigade. This decision could have saved lives.
“If your appliance is subject to a safety or recall notice or you think there is something wrong with it our advice is simple. Unplug it immediately and contact the manufacturer or a qualified repair technician.”