Our staff joined family and friends of one of London Fire Brigade's most remarkable wartime women firefighters at her funeral today.

Leading Firewoman Maisie Bess Spooner died recently at the ripe old age of 99 with her funeral at Enfield Crematorium.

As we celebrate our 150th anniversary we supported the family to get as many people from the fire and rescue service to attend as possible.

Wanted to do her bit

“Maisie or Big G or Mitzi as she was know to her friends and family was born in 1917 in Cheshunt and living close to London meant she grew up just in time to be a part of the war effort.

In 1939, just as World War Two broke out, Maisie knew she had to do something to help her family, friends and all the other Londoners.

She knew she had to do her bit and at 22 she joined the Auxiliary Fire Service (AFS). Initially she was stationed at '36Z' Kingsland Road where she served for most of the war. 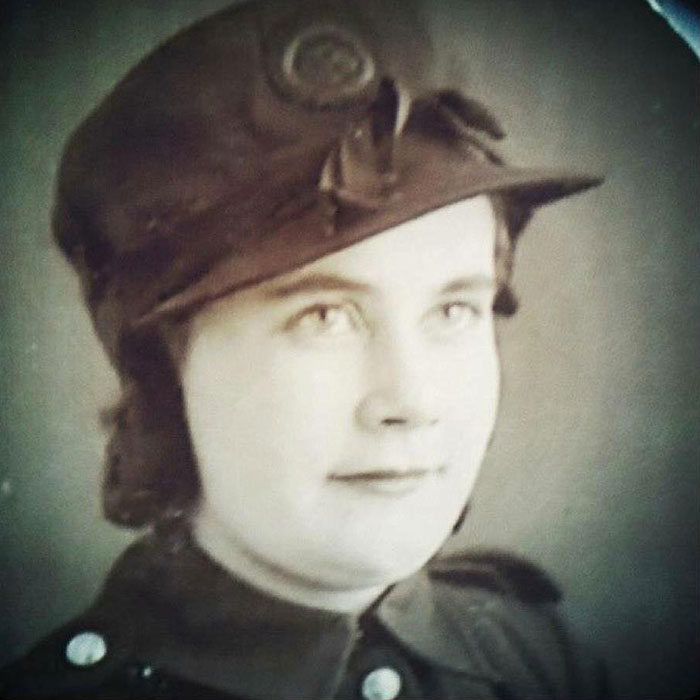 "As with all people of her generation she had a story to tell, a lot of them funny, her favourite to tell me being;

"We had been bombed a lot one week, I remember standing in the same spot working the pump for two days with only a few hours sleep in the back of the cab when this little lad came up to me all covered in dirt and dust.

"Didn't look like he'd washed for a week. He was saying 'Miss, Miss have you got any sandwiches, please Miss, 'me house has been all blown up and we ain't got no food.'

"So I gave him all my food and he skipped off singing 'You can't get me Mr Hitler, I've got me some sandwiches!'"

Kept on going to help as many as possible

"However not all the stories she told were jolly like that.

"Big G would tell stories of standing there working and watching bombs land on fire engines almost next to her and watching her friends lose their lives.

"But through it all, as did everyone at the time, she just kept on going, she wanted to make sure she could help as many people as possible.

"She would tell of hairy moments when she was hurtling across London driving the pumps where she would have buildings collapsing next to her, bombs landing around her and people running away.

"As with every good firefighter she kept going forward in to it whilst others went in the opposite direction because she knew people needed help.

"After the war she stayed with the fire service where she became a call handler working the switchboards of the time.

"As well as driving appliances she would take the canteen wagon to large incidents and exercises.

"Her favourite place in the world and where she loved to go the most was the Fire Service College at Morton in the Marsh. Her final role was  as Edmonton fire station's cook until she retired in 1978.

Brigade through and through

"She was fire brigade through and through. If you chopped her in half it would say 'Made in London Fire Brigade'.

"What I would like to do is give her the best send off I can. So if any off duty, retired or any firefighters can spare a couple of hours I know it would make her day as she sits up there behind the wheel of a Dennis to see a few uniforms other than just mine in the crowd."

London Fire Brigade's Director of Safety and Assurance and the capital's most senior woman firefighter Dany Cotton said: "We owe a huge debt of gratitude to our wartime women firefighters like Maisie who did so much to protect the nation but also helped pave the way for the women firefighters working today across the country.

"As we celebrate our 150th anniversary we must never forget the dedication of firefighters past and present and it was great for us to be able to give her a guard of honour she so richly deserved."