Our brand new fire engine will be taking part in one of the oldest ceremonies in the City of London on Wednesday (13 July) as we continue to mark our 150th anniversary.

The new Mercedes Atego 1327F, pumping appliance will be joined by a vintage 1930s fire engine at the annual Cart Marking Parade organised by The Worshipful Company of Carmen, one of the oldest Livery companies in the City.

The vehicles will form up along the roads around the Guildhall before making their way into the Guildhall Yard. Here they will be inspected by the Master of the Carmen’s Company and ‘marked’ (branded) by the Keeper of Guildhall.

For centuries, the Corporation of the City of London, exercised its rights over carts and carriers plying their trade in the City, controlling the number of ‘carts and carrs’ on the streets to limit pollution from sewage, ensure commercial goods were carried for reasonable prices and to raise taxation.

Today’s cart marking ceremony  re-enacts the obligation for carters to bring their vehicles to the Guildhall once a year to be marked with a number and a letter and to pay a fee.
The number and letter were branded onto a vehicle using a red hot iron on a wooden plate – believed to be the earliest known form of vehicle licencing. 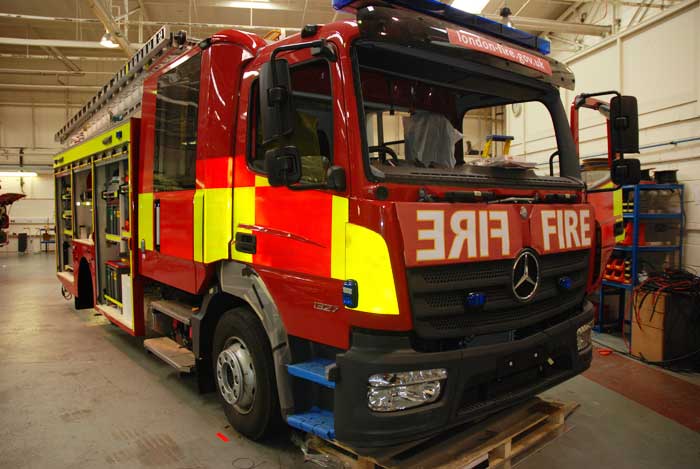 Celebrating the past and looking to the future

“It’s a perfect opportunity to not only celebrate our past but also look forward to our future. As well as having a vintage appliance in the parade this will be the first opportunity for Londoners to see our new design fire engine, due to go into service later this year.

"The new appliance will further improve the service we provide in the capital by using technology that will enable us to be even more efficient when responding to an emergency."

The parade, which starts at 1030 is free and open to the public. Our vehicles will be parked in Aldersgate Street, opposite the Lord Raglan pub, before making their way into the Guildhall Yard at around 1100.