The time and place Londoners are most likely to have a fire has been revealed following the publication of the most comprehensive fire data in our 150 year history.

The new fire census, released today, shows that July is the busiest month, 7pm is the busiest hour, that half of all household fires start in the kitchen and Tower Hamlets has more blazes than any other borough.

Last year, fires were below 20,000 for the first time since records for Greater London began in 1966. This decline is despite the population of London increasing by 1.3 million since the turn of the millennium. 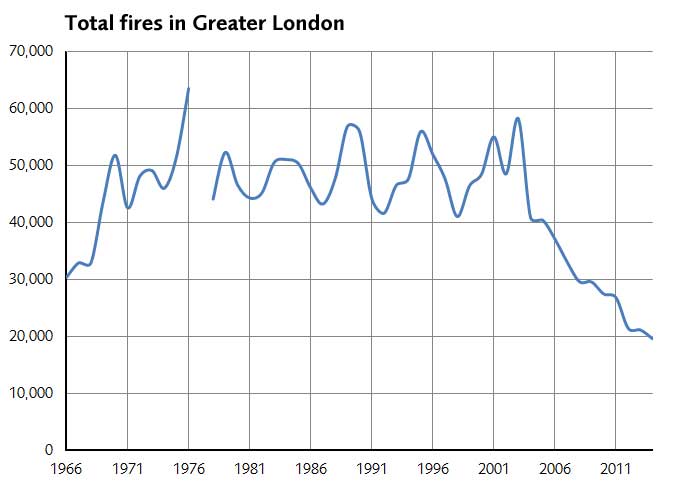 *In the chart above, figures for 1977 have been excluded because the data for the year was not complete as a result of national fire service strikes.

We believe the downward trend since 2005 is largely due to the huge amount of fire safety work carried out by firefighters and their targeted approach to those most at risk.

Firefighters increased the number of home fire safety visits to nearly 87,000 last year with the vast majority were to the capital's most vulnerable.

London Fire Commissioner Ron Dobson said: "We use this incredible wealth of data to target fire prevention and community safety work. The downward trend in fires is a huge credit to our staff and the public for acting on our life saving advice.

"The more information we can give about how, where and why fires happen will undoubtedly greater educate Londoners to the risks that still exist and hopefully save their lives.

"We are winning the battle but the war is far from over so we cannot became complacent.

"For the small number of fires smoking and candles cause they still cause a disproportionally high level of deaths especially with elderly people and we will continue our target approach to reduce fires and deaths further."

How, where and why fires start

The data, released as part of our Fire Facts series, also goes in to detail about how, where and why fires start in London.