Hammersmith firefighters are the first in the country to use fire escape hoods to help rescue a man from a house fire on Augustus Close.

When firefighters arrived they were approached by a woman standing outside the home saying that her son was on the second floor of the property. One crew tackled the fire on the ground floor while another crew went to rescue the man.

Hammersmith Watch Manager Paul Watson, who was at the scene said:

“Knowing that we had fire escape hoods meant we had more time and options to carry out the safest rescue. The man opened the window and it was clear that there was smoke behind him. We pitched a ladder to the roof level and sent a firefighter up to reassure him that crews were on their way up to him. Trying to rescue him out of the window was not the safest way of getting him out. Using the fire escape hood enabled us to lead him to safety through the smoke knowing that he would be protected from the toxic gases. 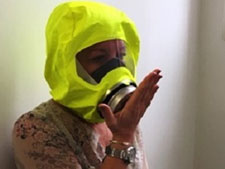 Our firefighters carry fire escape hoods for just this type of situation.

“He was taken to hospital by London Ambulance Service crews as a precaution.”

Fire escape hoods provide members of the public with up to 15 minutes protection from four of the main fire gases (carbon monoxide, hydrogen cyanide, hydrogen chloride and acrolein) and can be worn by conscious or unconscious people. If more than 15 minutes protection is required then another hood can be given to each wearer. They do not provide oxygen but temporarily filter toxic smoke to make breathing easier.

Half of the ground floor of the property was damaged by fire.

The Brigade was called at 1923 and the fire was under control by 1957. Firefighters from Hammersmith and Chiswick fire stations attended the scene. The cause of the fire is under investigation.

Firefighters from London Fire Brigade are among the first in the UK to carry fire escape hoods to protect members of the public from toxic smoke at fires.