World Book Day: What we recommend you read

In celebration of World Book Day, people from across London Fire Brigade have come together to share their book recommendations. How many have you or your children read? 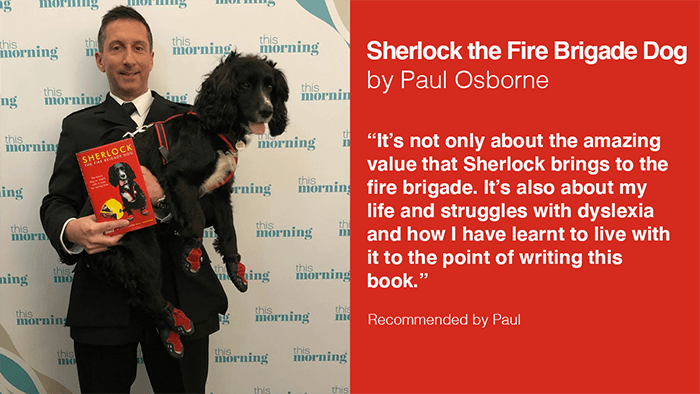 My Mummy is a Firefighter by Jason and Kerrine Bryan

Did you know that last year we worked with Butterfly Books to launch a book about women in the fire service? It’s part of a series aimed at four to seven-year-olds that showcases inspiring female role models undertaking jobs or professions that are stereotypically portrayed as being performed by men. You can find out more on the Butterfly Books website.

It wasn’t hard for Paul Osborne to recommend a book, because he's written one all about his work with Fire Investigation Dog Sherlock. It’s not only about the amazing value that Sherlock brings to the fire brigade and what he does. It is also about Paul's life and struggles with dyslexia and how he has learnt to live with it to the point of writing this book.

Just like his famous namesake, fire dog Sherlock has appeared in more than one book. ‘Heroic Animals’ by Clare Balding features the stories of 100 heroic animals, including Sherlock.

“The adventures of a magical cat called Gobbolino. Great for primary school kids.”

The Outsider by Stephen King, recommended by Izzy, a Fire Cadet

"A crime has been committed and evidence points to one suspect, except he was 70 miles away with an alibi. If you are into thrillers this is a must read. It is full of twists and turns that will keep you guessing until the very end.”

"It's about a whole world of mice who live under London and battle their enemies, who are the rats."

"I loved Anne of Green Gables. She was a feisty and determined girl that didn't let circumstances hold her back (and she had ginger hair like me!)."

Books about our history

Have you ever wanted to learn more about the history of firefighting? Here are three recommendations from our museum team to get you started.

This book follows the history of fire fighting back to the Roman era and provides useful context for the origins of equipment and practices, some of which are still echoed today.

Our Girls by Cyril Demarne

True Hero: The Life and Times of James Braidwood by Brian Henham

Learn about the origins of the Brigade as Braidwood moved from Edinburgh to London to lead the newly formed London Fire Engine Establishment in 1833, which united 10 independent fire insurance companies.

We do lots of work with children – from teaching them about fire safety at home, to the Great Fire of London. Here's where you can find fun home-schooling activities to keep your children occupied.

Our Education team have created resources for you to use at home when teaching your child about fire safety.