Firefighter’s mum awarded for quick thinking which saved her neighbours

Firefighter’s mum awarded for quick thinking which saved her neighbours

The mum of a firefighter has been praised for her quick actions to alert neighbours to a fire which officers said could easily have been fatal.

Sandra Bale, of Beckett Close in Belvedere, was locking up her home for the night when she spotted a glow in her conservatory and quickly realised her neighbours’ property was on fire.

She immediately phoned 999 and gave details of the fire to Control. She grew increasingly concerned for the safety of her neighbours, an elderly couple who she suspected would be asleep, so made her way to their home.

As she reached the property, the fire was already starting to spread to the upstairs so she began ringing the doorbell and banging on the door to alert them. As the blaze began to spread to the next house, she also made her way there to raise the alarm.

All the neighbours got out and Sandra also stopped a neighbour who had re-entered his property to try and put the rapidly developing fire out using buckets of water from doing so. 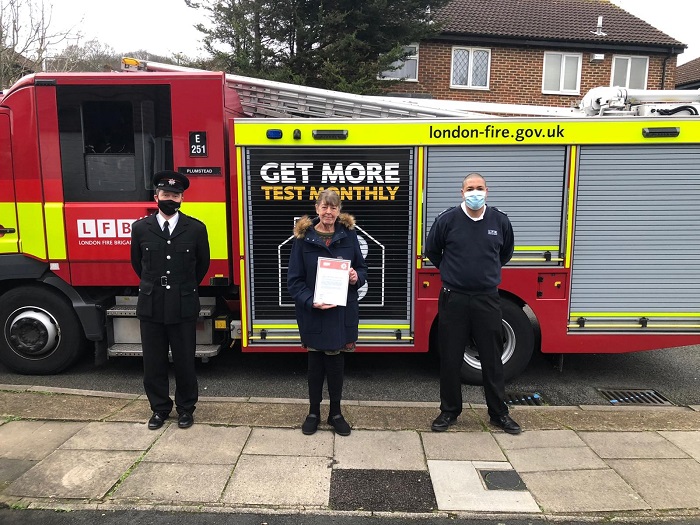 Several homes were badly damaged in the blaze and a number of people were assessed on scene by London Ambulance Service crews but thanks to Sandra’s quick actions, no one was seriously injured.

To recognise 70-year-old Sandra’s selfless response, she has been presented with a Borough Commander’s Letter of Congratulation.

Station Officer Gary Deacon was the first Incident Commander at the scene and said he was amazed there hadn’t been a fatality considering how quickly the fire had developed.

"Without her quick reactions and selflessness, we would have had a fatality"

He said: “I know some of the neighbours have been round to thank her since the incident and believe they are alive because of her actions.

“It is my opinion that without her quick reactions and selflessness, we would have had a fatality that night and she should be recognised for her actions.”

Her son, Mark Deane, is a Station Officer at Plumstead Fire Station and nominated his mum for the award.

He said: “I was really proud when I heard what mum had done and it’s so nice for her to receive this recognition. She struggles with her mobility and every step is painful for her so it feels even more courageous.

“Firefighters are always talking to friends and family about what to do in the event of a fire so when you see them act on your advice and it results in lives being saved it’s really a great feeling.”

The fire happened on 26th August 2019 and was attended by six fire engines and around 40 firefighters. Sandra was presented with her award at her home by Plumstead Station Commander Stephen Irvine last week.