Firefighters are linking up with the RNLI to deliver life-saving water safety training to staff at some of London’s waterside venues.

As the weather warms up and pubs and bars reopen their doors after months of closure due to the Coronavirus lockdown, there are concerns people could get into difficulty in the water.

This week (April 26) is the National Fire Chiefs Council’s Be Water Aware week and sees the launch of a new partnership, a Train the Trainer programme, between the Brigade and the RNLI.

The announcement of this training programme follows the tragic incident at the weekend where a man sadly died while trying to rescue a woman who had fallen into The Thames. Firefighters always advise if you see someone in the water call 999 for help.

All firefighters receive some water safety familiarisation training when they join and all fire engines carry a throwline. This programme will see the charity’s volunteers talking crews through how to deliver water safety advice and train them on how to give throwline training to staff at waterside bars, restaurants and other venues.

What to do if you see someone in the water

The scheme will initially be piloted with crews at Lambeth River, Richmond and Twickenham fire stations and other staff will also receive the training so it can then be rolled out across the Brigade.

London Fire Brigade has responded to more than 430 incidents where people have been in difficulty in the water since 2017. There have also been more than 180 water rescues involving animals in the same time period. These are both in The Thames and other bodies of water in London such as canals, lakes and ponds.

Firefighters have already attended more than 50 water rescues in London so far in 2021. These included a person stranded in a pond in Wandsworth, a sheep which had fallen into a gulley in Enfield and a dog stuck on the foreshore in Chiswick.

Station Commander at Lambeth River Fire Station, Brin Powell, whose crews respond to the majority of water rescue incidents attended by the Brigade, said: “The tragic incident at the weekend is a terrible reminder of what can happen if people do get into difficulty in The Thames and our thoughts are with the friends and family of Folajimi Olubunmi-Adewole, who sadly lost his life in an act of bravery.

“People have been shut up indoors for months and we completely understand that as the weather warms up and pubs reopen, they want to get out and enjoy the entertainment our great city has to offer. 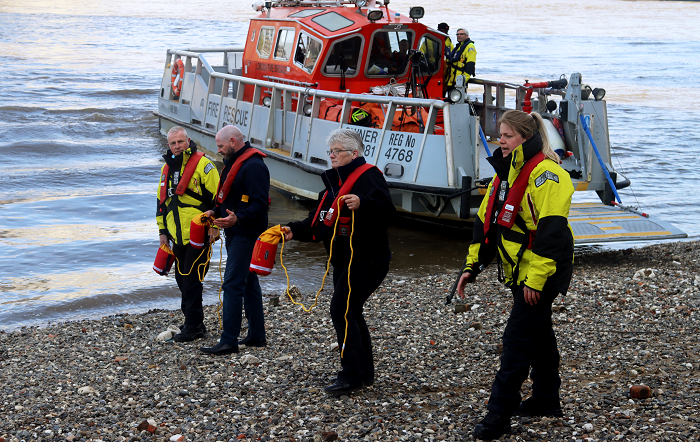 “We don’t want to scaremonger, but we do want people to understand the very real risk posed by London’s canals, waterways and The Thames.

“There’s the risk of slipping and falling in if out exercising or getting into trouble if you’ve been out drinking near water and if you do fall in, you could go into cold-water shock.

“But there are things you can do to keep yourself and others safe so we are delighted to be partnering with our colleagues at the RNLI to provide life-saving advice to those Londoners who live and work along the banks of the river and near other bodies of water.

“The more people that know how to use throwlines and know what to do in the event of an emergency in the water, the more chance there is of lives being saved.”

Guy Addington, the RNLI’s Water Safety Lead for the South East, said: “If someone ends up in The Thames, then seconds count in saving their lives, so teaming up with London Fire Brigade is a fantastic way of getting vital safety messages and advice to as many people as possible.

“Even in the summer the water temperature in the Thames can be low enough to induce cold-water shock and with the river flowing faster than an Olympic swimmer the chances of survival are slim. Therefore, having staff working at venues along the capital’s waterways who know the risks, can deliver safety advice, and be ready to act in an emergency by using a throwline really will help save lives.

“If you do find yourself in the water and suffering from cold water shock then follow the RNLI’s ‘Float to Live’ advice. Fight your instinct to swim hard or thrash about – this can lead to breathing in water and drowning. Instead, relax and float on your back until you have regained control of your breathing and call for help."

London Fire Brigade has 2 fire boats – Firedart and Fireflash. They are moored in Lambeth, and used for more tasks than you might imagine!