A man who was rescued from a house fire as a baby 18 years ago has been reunited with the London Fire Brigade firefighters who saved his life.

Brian Mottram was 18-months-old when a fire broke out at his home on Thornby Gardens in Edmonton in 2002. Brian’s dad Clive tried to get back inside to rescue his son but couldn’t get near due to the thick smoke.

When Edmonton Green Watch arrived at the scene, Firefighters Simon Cullen and Billy Merrifield entered the property wearing breathing apparatus and after carrying out a search, rescued Brian from a first floor bedroom.

Brian, now 19, suffered 44% burns and was rushed to a specialist burns hospital, where he was given just a 5% chance of survival by medics. But miraculously he pulled through.

Last Wednesday, he visited Edmonton Fire Station along with his partner Jessica, who is expecting their first child, and Clive. He met with the crew, including Billy who is still on Edmonton Green Watch, and Simon, who has now left the Brigade but travelled to meet Brian. 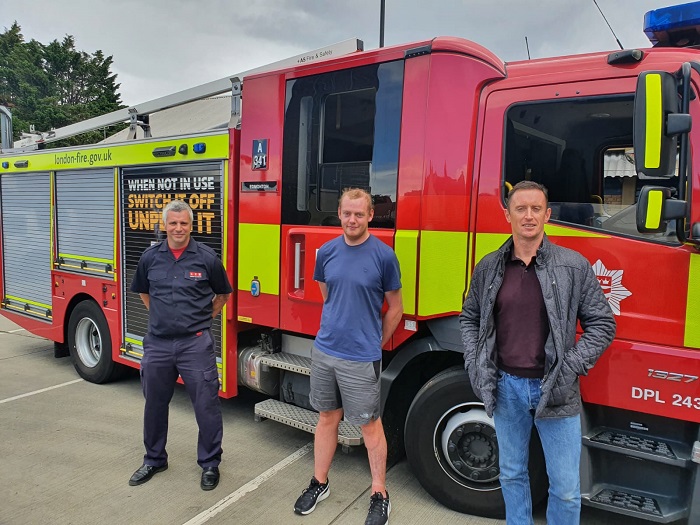 Simon was around five years into the job and although he had attended many house fires, he knew it was something out of the ordinary.

He said: “We had been told the child was definitely in the room and I remember hoping that he wasn’t and that he was somewhere else because of the state of the room, but then we found him.

“At first I thought he was a doll but quickly realised he wasn’t and I just picked him up and carried him outside into the front garden.”

Firefighter Merrifield was in his first year on the job at the time of the fire and recalled that it was his first “persons reported” fire where there was actually someone inside.

He said: “I can remember driving round the corner and a neighbour had a ladder up and was trying to break the window. Simon found Brian in the bedroom and I remember him being laid down on someone’s fire tunic and being given oxygen before he was taken away in the ambulance.

“We did get updates about him but we were assuming the worst – he was barely alive – then when we came back on duty for the next tour we found out he was still fighting and pushing on and against all the odds he made it through.

“Fortunately we don’t get that many jobs involving children so this one has definitely stuck in my mind - last time Simon and I met up we had even talked about it, so it was an incredible surprise to see Brian.

“What happened that day and at the station last week – it doesn’t happen often and it was really special.”

Simon travelled from Weymouth where he is now based to attend the reunion and said it was really nice to see Brian now.

“I couldn’t believe that all these years later we’ve seen him all grown up,” he said.

“He wanted to piece together a few things about what happened and it was nice to be able to help with that.” 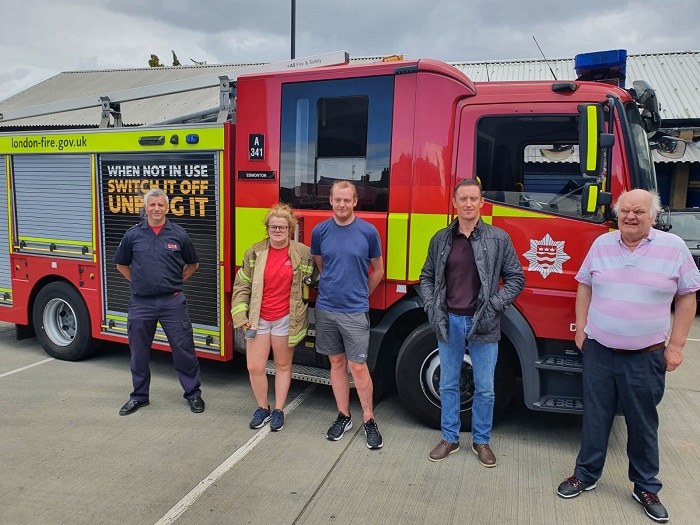 At the station, Brian was able to talk to Billy and Simon about the fire and ask some of the questions he has lived with. He was also given a tour of the station and a chance to look through all the equipment and learn a bit more about the job.

He said it was emotional but worth it. “It’s helped to give me a bit of closure. I was only 18 months old so it was good to get some answers around exactly how I was rescued,” he said. “The guys were really great.”

Brian currently lives in Somerset and has only recently got back in touch with his dad, so the reunion at the fire station was especially rewarding for Clive, who had the initial idea to visit.

“I wanted to take him there both for Brian and for the firefighters – so they could see someone they saved 18 years ago,” said Clive.

“Really and truly if I had a gold medal I would like to hand it to Simon. If it wasn’t for him, my 19-year-old son, who is making me a grandad, might not be here.

“Seeing Brian go round the fire station and seeing his face light up was so rewarding. Visiting has helped him with getting some closure and moving on.

“The guys were just brilliant and couldn’t do enough for us – the whole of Green Watch were just fantastic and it was so nice to see Simon in person and say thank you for saving my son.”