London’s firefighters and 999 Control Officers have had a busy few weeks as extreme weather has resulted in grass fires during heat waves and severe flooding caused by summer storms.

Climate change is causing higher temperatures which usually means firefighters see an increase in grass fires. However, the extreme storms that follow a heatwave have also been causing severe flooding across the capital.

London Fire Brigade crews have attended incidents across the capital throughout August as torrential downpours caused localised flooding. Last weekend, there was severe flooding in parts of London, including in Rainham where on Saturday night (15 August), in just two and a half hours the Brigade’s 999 Control Operators took more than 90 calls to flooding incidents.

Firefighters were on scene all night assisting people who were affected.

Crews in Camden were also in attendance at a high number of flooding incidents on Saturday night and on Thursday (13 August), there were around 70 flooding-related calls in Croydon in just an hour as people were trapped by flash floods and rising water levels. 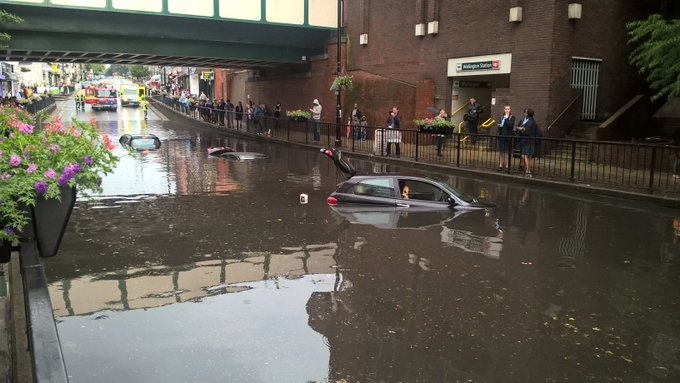 “On Friday, Saturday and Sunday we took more than 1,800 emergency calls and a high number of these were to flooding incidents.

“I’d like to praise our Control Officers and firefighters for their response in handling such a spike in incidents.”

In an effort to respond to these incidents of extreme flooding, Control staff introduced batch mobilising to certain incidents, which means calls where there is a risk to life are prioritised and crews then attend other calls as non-emergencies when they can.

This is introduced so the whole of the Brigade’s resources aren’t tied up dealing with a spate of non-emergency calls in one area.

Assistant Commissioner Jennings added: “Our firefighters are on the frontline responding to many of the impacts of climate change in London and the impact of that is only set to increase.

“If people do experience flooding as the uncertain weather continues, we would encourage you to follow our safety tips.”

The Brigade has a range of equipment which can be used to help rescue people trapped by flood water, pump water away and protect properties.

Fire rescue units are equipped with water rescue equipment such as inflatable rescue boats and the Brigade has four specialist flood response kits, each of which contains rigid flood rescue boats and paddles and rigid floating pontoons, which can be used to make bridges and walkways to rescue people. They also contain protective dry suits and boots to be worn by fire crews when rescuing people from flooded areas.

London is a city built around water, so perhaps unsurprisingly, the London Fire Brigade attended 6526 flood-related incidents in 2017.