One of London Fire Brigade’s four-legged detectives with a nose for sniffing out the cause of fires is being sponsored by a law firm which specialises in claims for household appliance blazes.

The Brigade’s newest Fire Investigation Dog, Watson, is to be sponsored by Leigh Day, which will support the costs of his upkeep including care, food, training and vet bills.

English springer spaniel Watson joined the Brigade’s team of fire dogs alongside canine colleagues Sherlock and Simba at the end of last year. He came from a litter bred by the Metropolitan Police Service and was gifted as part of a blue light collaboration scheme. 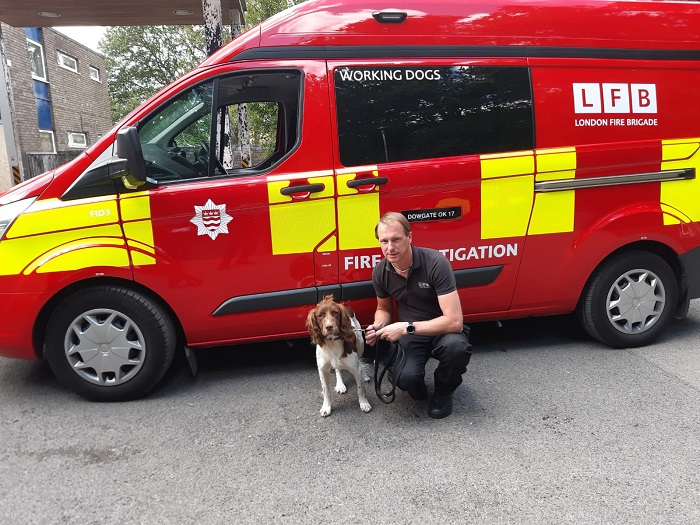 The sponsorship has come about because Leigh Day has an affinity to the work of the Brigade and its Total Recalls campaign, which aims to make white goods safer.

Leigh Day assists the victims of fires caused by defective products, including white goods such as tumble dryers, washing machines and fridge freezers.

As well as providing support for Watson’s costs, the sponsorship means that Watson and his handler, Fire Investigation Officer Darren Woodhams, will attend Leigh Day events, when they can take place again, to highlight important fire safety messages to visitors and talk about how they can keep safe at home.

Deputy Assistant Commissioner for Fire Safety, Charlie Pugsley, said: “I’m really pleased that we’ve partnered with Leigh Day in support of one of our fire dogs.

“Given their shared interest in the work of our Fire Investigation Team and our Total Recalls campaign, we hope it will further support the great relationship we already have.

“Watson will be an excellent ambassador for the Brigade and help deliver vital fire safety messages to the communities we serve as well as carrying out his day job of sniffing out the causes of fires."

Leigh Day Partner Jill Paterson heads up the Fire Claims Team. She said: “Leigh Day is delighted to be supporting the London Fire Brigade in its work to make London the safest global city.

“The work of the Brigade’s Fire Investigation Team is at the forefront of identifying causes of fire and driving forward fire safety and prevention of fires in our homes.

“The work of fire investigation dogs is intrinsic to the team and we are proud to sponsor Watson and his handler Darren.

“At Leigh Day we are experts in assisting victims of fires caused by defective products, including white goods, so that they can recover from the harm and damage they have suffered.

“We recognise the crucial role fire investigation plays in making London a safer place to live, work and visit so we are very proud to support our four-legged friend.”