Londoners are now able to recycle their clothes at fire stations across the city while supporting a good cause.

Textile collection bins in aid of the Fire Fighters Charity will be installed at 35 London fire stations between now and next spring.

While there have been bins at a handful of fire stations over the years, the drive to install even more has been launched at Sutton Fire Station.

The charity, which supports serving and retired firefighters and their families, raises more than £500,000 a year from its textiles recycling scheme.

The bins can be used for donations of adult and children’s clothing, socks, coats, underwear, pairs of shoes, handbags and linen. They do not accept bric-a-brac, plastic, toys or electrical items.

The donated items are collected by recycling partners and the clothing is re-used, often sent to under-developed countries, and unwearable textiles are recycled. 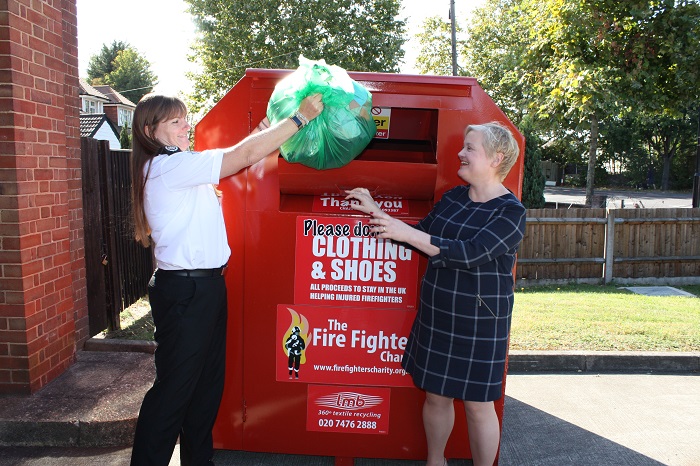 Bromley Borough Commander Terry Gooding, who is also the Brigade’s representative for the charity, said: “We are delighted to be able to have these textile bins installed at so many of our stations.

“It’s useful for our staff to have easy access to the bins and members of the public will also be welcome to drop their unwanted textiles off as well.

“As well as diverting unwanted clothes away from landfill and decreasing people’s carbon footprint – the donations will also raise money for a cause which is close to the hearts of most firefighters and their families.”

Deputy Mayor, Fire and Resilience, Fiona Twycross said: “This is a brilliant initiative by London Fire Brigade to raise funds for the Fire Fighters Charity and to recycle unwanted clothes at the same time.

"It’s good news to see the collection bins rolled out across 35 fire stations from Sutton to Stratford, increasing Londoners’ access and raising money to provide support for our hardworking firefighters who put themselves in danger to keep us safe.”

You can find your nearest textile bank by entering your postcode here.

Ambitions for the future

Understand how sustainability influences our strategy, our thinking and our actions, and find downloads for our strategy and annual report.

Our firefighters often work in dangerous smoke-filled environments – and rely on breathing apparatus (BA) for their safety – so we need to test it regularly.