The Brigade's firefighters will hurtle headlong down a "mountain" in a unique bobsleigh fire engine as they bid to raise money for charity by taking part in this year’s Red Bull Soap Box Race.  The team have dubbed themselves ‘Hot Runnings’, in a tribute to the iconic 1980s comedy film ‘Cool Runnings’.

Firefighters from Woodside and Croydon fire stations will take part in the race at London’s Alexandra Palace on Sunday 7 July. Team ‘Hot Runnings’ have redesigned an old Team GB bobsleigh into a distinct fire engine complete with blue light and siren, as they attempt to navigate the tricky 437 metre-long course to raise funds for the Fire Fighters Charity. 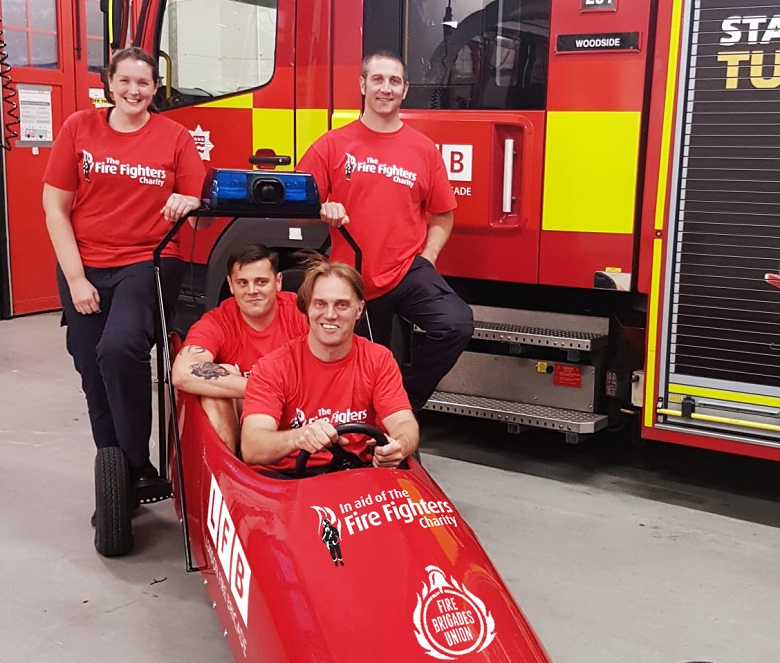 The Red Bull Soapbox Race was first held in 2000 and more than a hundred races have been held in multiple countries around the world since. The competing vehicles must have steering and braking capability. In the annual event, teams are judged on both the time taken to complete the course, as well as creativity of their design and the showmanship of a performance at the start of the race, meaning the team with the fastest time is not necessarily the winner.

The team captain, vehicle designer and driver, Firefighter Peet Boxall, found a unique way to combine his passion for the fire and rescue service and the judging criteria of the soapbox race. He said: “I took part a few years ago and decided I wanted to give it another go. I was lucky I was able to persuade the others to join me.

“It’s been quite an experience preparing for it and we’re really excited to take part. We’re raising money for the Fire Fighters Charity as it’s a cause really close to my heart. Back in 2014 I had a back injury for  two months. Thanks to the time spent at their rehabilitation centre I got back on my feet. My teammate, Emma, has also benefitted from their services after she underwent knee surgery. We’re so grateful for their valuable work I want to give something back to the charity.

'Feeling optimistic' going into the race

“I’m optimistic that we will do quite well but the main thing is to have a great time on the day and raise lots of money for a worthy cause!”

The group comprises of Peet Boxall and Martin Thompson who will racing in the soapbox with Pascal Davis and Emma Watling who will be pushing them off down the hill. The team completed some training sessions with the British Bobsleigh Team at their training centre in Bath to perfect their downhill start.

All money raised from their appearance will go towards The Fire Fighters Charity, which provides specialist mental health, physical health and social support for the UK’s fire service community.

Find out more about the team on their official race page and Facebook page. To donate visit https://www.justgiving.com/fundraising/hot-runnings.