We’re urging people not to enter into open water during the heatwave as three people drowned in the capital yesterday.

With the weather heating up it may be tempting to dive in and cool off in one of London’s rivers, canals, or docks. Despite warm weather outside, temperatures of many ‘swimming spots’ in London are still cold enough to put a person into cold water shock even in the height of summer. 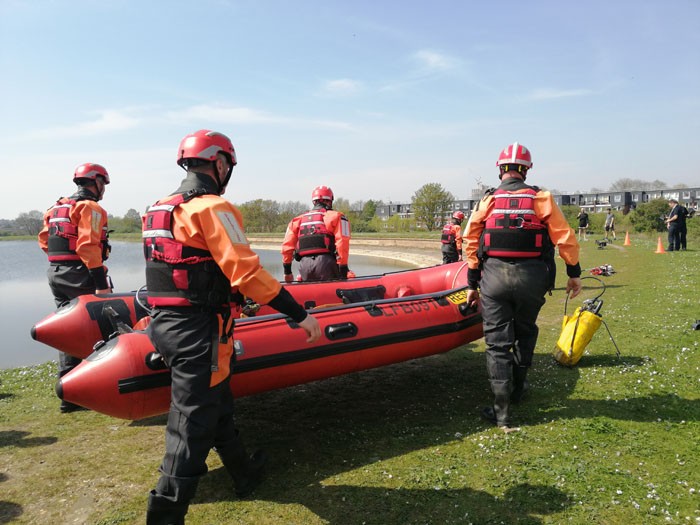 The first tragic incident occurred around 6pm in the Shadwell Basin just off the River Thames in east London. A man is believed to have entered the water with friends but shortly went under. Fire Rescue Unit crews alongside emergency partners carried out a systematic search of the scene but sadly he could not be found. The incident was over for us at 8.29pm.

Despite warm weather outside, temperatures of many ‘swimming spots’ in London are still cold enough to put a person into cold water shock even in the height of summer.

Shortly after the Shadwell incident was closed, we was called (8.34pm) to a man who had gone under the surface after trying to swim across a stretch of the River Thames in Kingston at the Queens Promanard at the rear of a pub. Firefighters from Surbiton, Kingston, Heston and Battersea fire stations attended the scene with crews from the RNLI. They carried out a comprehensive search but sadly could not locate the man. The incident was over for fire crews at 10.47pm.

At exactly the same time as the 999 call came in for the incident in Kingston a separate call was taken for someone in the water near Waterloo Bridge. Once again ,despite the best efforts of firefighters from Lambeth, Soho, Bethnal Green and East Ham fire stations, the Lambeth River Boat station, and the RNLI, and the police the individual could not be located.

"This is the single worst day for drowning incidents the Brigade has attended in my 25 year career. Going into the water might seem like a good idea in the hot weather but it is  incredibly dangerous as the water is a lot colder than you’d expect.

“Cold water can cause your body to go into shock no matter how fit you are, causing panic, anxiety, disorientation and loss of muscular control. These reactions can also cause you to gasp for air resulting in water being inhaled.”

Anything below 15°C is defined as cold water, and on average the UK and Ireland sea temperatures are just 12°C. Rivers such as the Thames are colder - even in the summer.

There were also a number of near misses across London yesterday. Firefighters at Lambeth River Boat Station saw a man in the water near their station. They quickly placed a throw-line into the Thames and mobilised the fire boat to rescue him.

We've got advice for homeowners and businesses on how to reduce the risk of arson.