Watson the English springer spaniel is going through an intensive training programme with the hope he will be put to work alongside his canine colleagues Sherlock and Simba early next year.

In a first for the Brigade, Watson has come from a litter bred by the Metropolitan Police Service and has been gifted as part of a blue light collaboration scheme. Watson in turn, can look forward to a career of helping both the police and LFB, by sniffing out evidence of arson.

The one-year-old pooch was officially handed over to Fire Investigation Officer Darren Woodhams, who will be his handler, at the force’s dog training establishment in Keston on Wednesday (18th).

Read more about how we train our fire investigation dogs

Fire Investigation dogs are trained to detect the presence of ignitable liquids at fire scenes, which are known as target substances. They will identify an area of interest, which is then documented before samples are taken for analysis by police. As well as sniffing out crime, the fire investigation dogs are also ambassadors for the Brigade, promoting fire safety messages to a wide range of communities.

Watson was initially selected by the Metropolitan Police Service based on his drive for play. His intensive reinforcement training programme rewards him with a tennis ball each time he detects one of his target substances.

Darren has been working with Watson since mid-October and he lives with him at his home, accompanying him to work when he’s on duty. 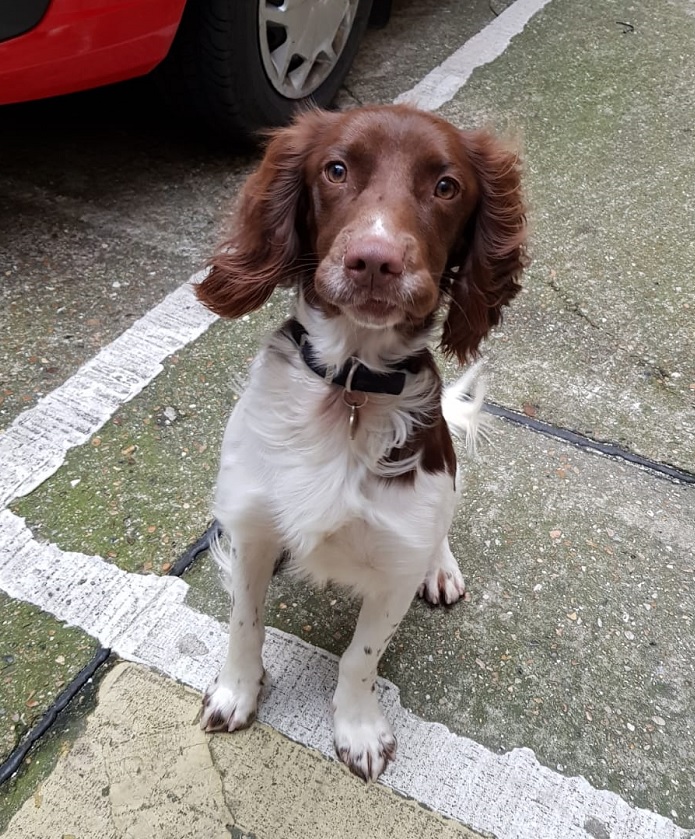 They have already completed one week’s training with fire dog specialist Clive Gregory – who  has been training the Brigade’s dogs and handlers since the team was first established in 2000. They will complete another two weeks in January and there will then be a certification assessment and if he passes that, he will become a fully qualified member of the Fire Investigation team.

Darren, who was a Watch Manager at Tooting before joining Fire Investigation in early 2016, said he was interested in taking on the role of a dog handler having grown up with working dogs. He also wanted to expand his role and learn a different aspect of Fire Investigation.

He said: “I’m really enjoying working with Watson – it’s been challenging at times adjusting to having him around but he’s a lovely dog and so far it has been very rewarding seeing him develop.

“He’s very friendly with people and other dogs, and he’s very laid back, taking most things in his stride. Simba, one of our other fire dogs, and Watson  get on well and are becoming good friends. I think he will learn from Simba as they spend more time together.”

“I’ve been working alongside Paul and Anton – the Brigade’s other two dog handlers –which has given me a really good grounding for my training as well as Watson’s.

“He is still a trainee and we have a rigorous training programme to go through but I’m hopeful  that if we carry on as we are we will be successful and Watson will officially join the ranks next year.”

London Fire Commissioner Dany Cotton said: “I had the pleasure of visiting the police dog school at Keston earlier this year to see first-hand the vital work they do.

“I met a litter of Springer Spaniel puppies while I was there and this week, I was honoured to receive one of the puppies, who has been named Watson, from Commissioner Cressida Dick.

“He will be working within our Fire Investigation team who work closely with the police.

“The Brigade and the Metropolitan Police Service have a long history of working closely together with the shared aim of protecting the people that live, work and visit London.”