Plaque to one of London’s first black firefighters unveiled

Plaque to one of London’s first black firefighters unveiled

One of the first black firefighters* to serve with London Fire Brigade has been commemorated with a plaque unveiled at his former station.

George Arthur Roberts BEM (1890-1970) served at New Cross Fire Station for the duration of the Second World War and was awarded a British Empire Medal for his service.

Born on the Caribbean island of Trinidad, he was a First World War soldier who fought at the Battle of the Somme and was awarded a medal for his bravery.

He went on to become a leading fireman for the London Auxiliary Fire Service (AFS) and started his service at New Cross Fire Station in 1939. (The term firefighter was not officially adopted as a job title until the 1980s). 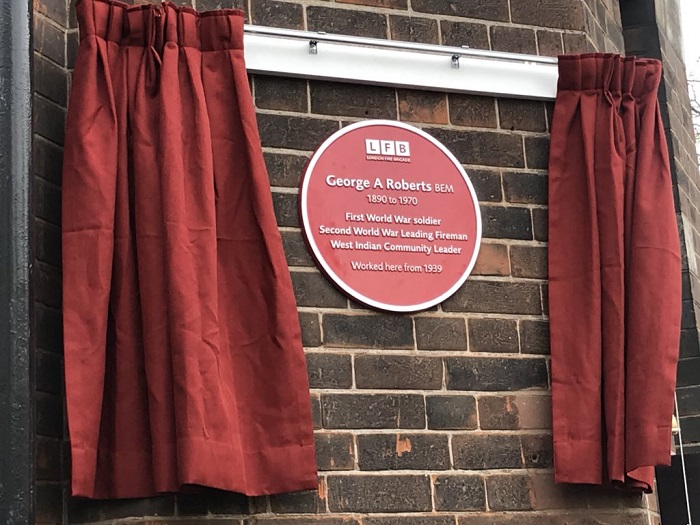 Representatives from London Fire Brigade, The Fire Brigade’s Union and George Roberts’ great granddaughter, Samantha Harding, were at a special event at his former fire station on Sunday to witness the unveiling of the plaque.

Samantha Harding said: “It’s always overwhelming for me to attend these events as it brings to light all of the incredible things he has done.”

London Fire Brigade Watch Manager Micky Nicholas said: “George’s legacy has led to there being members of Caribbean and other diverse communities in the Brigade today.

“It’s right that we are commemorating the first identifiable black firefighters in London at a time when we are trying to recruit a more diverse workforce.

There is less than a week before the recruitment round ends and the Brigade really wants our workforce to better reflect the city we serve. I would urge all members of London’s varied communities to seriously consider firefighting as a career option.”

Interested applicants can find out more about the requirements on the Brigade’s website. For details about the role and how to apply visit the London Fire Brigade’s firefighting careers website.

The deadline to apply is 19 April.

* Historically the Brigade only employed men as firefighters hence the term ‘fireman’ when referring to George Arthur Roberts who began his service in 1939. The first woman firefighter joined London Fire Brigade in 1982 and nowadays, 36 years later, we use the term firefighter to reinforce that our modern fire and rescue service is open to both men and women.