Meet Sherlock, the Brigade’s fire investigation dog with a nose for saving lives.

Our four-legged super-sleuth is the subject of a new and official book written by his handler Watch Manager Paul Osborne.

Sherlock The Fire Brigade Dog, due to be published on May 4 to coincide with International Firefighters’ Day, is a joint collaboration between Paul, London Fire Brigade, LFB Enterprises (LFBe) and the publisher, Penguin Books.

The book tells the story of the unbreakable bond between Paul and Sherlock formed the moment they first met in 2013 to how four years later, their partnership has become an important and integral part of the Brigade’s firefighting and prevention team.

The book provides a fascinating, and often comic, insight into Paul's life with his best mate, both at work and at home, highlighting Paul's favourite moments including meeting HRH Prince Charles and picking up the Mirror and RSPCA Animal Hero award in 2017, alongside Sherlock's now retired team mates Murphy and Roscoe. 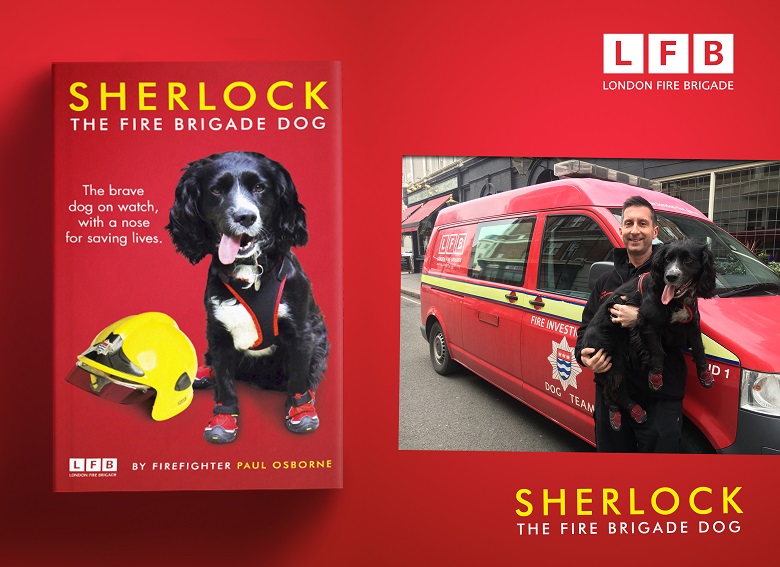 Paul Osborne, Watch Manager in the Brigade’s Fire Investigation Team and Sherlock’s handler, said: “Sherlock is an invaluable asset to the fire investigation team and I am incredibly fortunate to be able to work with him so closely.

“The work Sherlock does always fascinates members of the public and he is always a hit among children and adults alike when we attend fire station open days, carry out school visits and even when we arrive at the scene of an incident.

“This book will give the public a real insight into the work we do together and I hope everyone enjoys finding out more about how important and well loved Sherlock is not only by myself and the Brigade, but also my family and the general public.”

Sherlock assists the Brigade with fire investigation, resulting in a higher level of accuracy and conviction rate of deliberately set fires where an ignitable liquid has been used.

The five-year-old working cocker spaniel is trained to identify the presence of 10 ignitable liquids, ranging from acetone to petrol, whether neat, evaporated, burnt or mixed. These are known as his 'target substances'.

While at work, Sherlock will identify an area of interest, which is then documented before samples are taken by a police scenes of crime officer for analysis. He can identify much smaller amounts than portable equipment and can do it much quicker, saving time and money.

More about our work work