A former London Fire Cadet has risen through the ranks to officially become a firefighter serving in the capital.

Nick Cambridge, from Romford, passed out from firefighter training school on Friday, February 16 along with 13 other new recruits. The new firefighters spent 11 weeks in training and were put through their paces to learn the full range of skills required by a modern day firefighter including immediate emergency care, breathing apparatus procedures, firefighting in buildings and in the open, incident command procedures, dealing with hazardous materials, and road traffic collisions.

Nick, 20, joined the Brigade’s Havering Fire Cadet unit at the age of 16 and instantly knew he wanted to become a firefighter when he was old enough to apply.

He said: “Being a fire cadet and training inside a working fire station gave me an insight into what it would be like to work as a firefighter. Seeing the firefighters going out to emergency calls was really exciting. 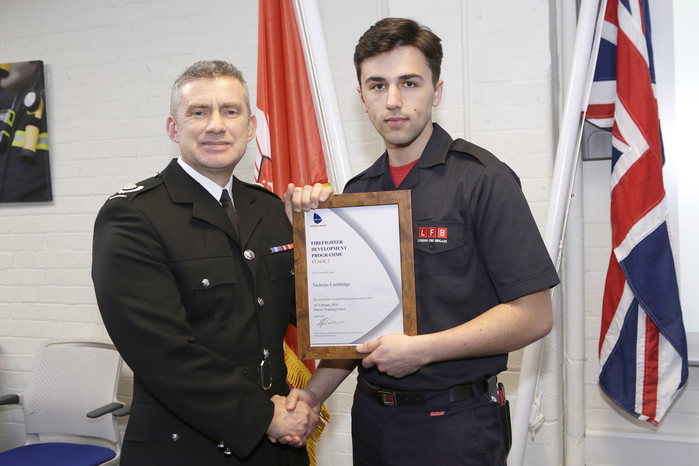 “The teamwork of firefighters was also something I admired and while I was a fire cadet, I realised how important it was to be part of a team and to have trust in others.
“My time with the cadets also equipped me with an understanding on some of the practical skills like how to safely carry and pitch a ladder and roll out lengths of hoses, which I developed further in training school.”

Youth engagement is an integral part of the community safety work carried out by the Brigade and the cadets scheme helps introduce firefighting as a possible career to diverse communities across London.

Teaching young people about fire prevention is also a core way of spreading essential safety messages across the capital.

The fire cadets programme, is a free and nationally recognised programme, which gives young people aged 14-17 years old the opportunity to develop personal skills and gain a credible qualification.

• Firefighting techniques such as climbing ladders, using hoses and wearing breathing apparatus sets
• First aid and casualty care
• How the Brigade educates the public about fire safety and fire prevention

Deputy Assistant Commissioner Lee Drawbridge, who attended the passing out ceremony, said: “Congratulations to Nick and all of course B17 for their success and achievement in becoming firefighters with London Fire Brigade.

“Fire Cadets are essential for the future of the Brigade and it is fantastic to see a former cadet fulfil their career dream. Not only does the fire cadets scheme provide incredible experiences and a chance to learn life skills, it also means that we are introducing firefighting as a possible career to new young people from different communities and backgrounds across London.”

Nick will join white watch at Edmonton fire station and will continue to volunteer with the cadets.

You can find out more on the Fire Cadets' page.