Firefighters from Richmond carried out an un-bill-ievable rescue after a duckling fell into a drain while crossing a road in Barnes.

While crews succeed in their rescue and were happy to take the duckling under their wing until it was reunited with its mother, the Brigade is urging the public to call the RSPCA first if they see an animal trapped or in distress.

Crews were called to Swan Place in Barnes after a worker of a nearby pet store saw some ducklings and their mother walking along, when one of the tiny ducklings fell through the a drain grate.

The mother duck and other ducklings fled and the worker tried to rescue the lost duckling but to no avail, so called firefighters to assist. 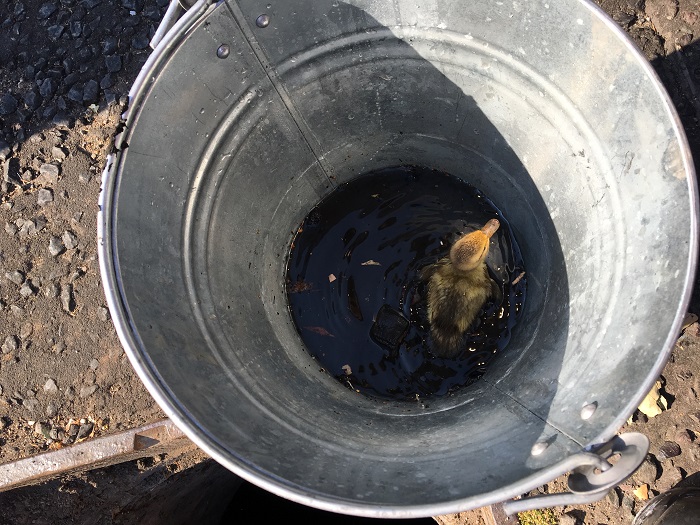 Watch Manager Jonathan Kerslake, who was at the scene, said: “When we arrived, the pet store worker was sat by the drain cover but the duckling had gone into the drainage pipework. We gently sprayed a little water down several drains to try and find where they led, eventually finding a drain access hatch with a distinct sound of little chirps coming from underneath.

“Once we lifted the hatch and shone some light inside we spotted the little duckling swimming around with no way to escape.”

Firefighters used lighting, buckets and lines and Crew Manager Nicholas Drewett was able to scoop up the duckling and bring it back to road level.

Watch Manager Kerslake added: “While this was a quick job for firefighters, we would always urge members of the public to call the RSPCA in the first instance if they see an animal stuck or in distress.

“If the RSPCA require our assistance, they will call us and we are happy to assist with our specialist equipment.

“Firefighters love animals too and we will always help if the RSPCA need us to, but we should only be called for real emergencies.”

Duckling given clean 'bill' of health and reunited with family

Despite the rescue going swimmingly, the duckling needed to be reunited with its mother but she could not be located at Barnes Pond.

Rather than leaving the duckling to fend for itself, it was left in the care of the pet store employee who arranged for some willing volunteers to patiently sit at the pond until the mother duck and siblings appeared and the duck family then swam off together.

The Brigade was called at 0817 on July 6 and the incident was over for firefighters at 0845. One fire engine from Richmond fire station attended the scene.

Richmond fire station, Twickenham fire station. News and events about the borough of Richmond upon Thames.