Fire Cadets are honouring the fallen with an installation of ‘Tommy silhouettes at London Fire Brigade headquarters in the run up to the 100th anniversary of the end of the First World War this week.

The 10 silhouettes are life size replicas of First World War soldiers and they're on loan from the Remembered charity and form part of an installation created by the Brigade’s Fire Cadets.

Around 17 million soldiers and civilians lost their lives during the First World War including 32 London firefighters who lost their lives as a direct result of the conflict, 29 fighting overseas. Three more firefighters: Fireman J. S. Green, Fireman A. A. Vidler and Fireman C. A. Henley, died while on duty in the capital between 1914 and 1918.

Little is spoken about the aerial bombardment London faced during the Great War. In total, 922 bombs were dropped over the course of the war, of which 567 were high explosives and 355 were incendiaries in the form of oil bombs.

Find out about becoming a fire cadet or a volunteer instructor

Crew Manager Cadet Terry Burnett, 16 who helped put together the installation, said: “A hundred years ago, young people around my age would have been sent into battles and it is important we recognise their sacrifice, as they gave their tomorrow so we can have today.

“I am proud to represent the Brigade as we remember those who did incredible acts of selflessness in order to protect people that they may have never known.

“For me, remembrance is about learning about the past so that we will never have to experience such a tragic event ever again. 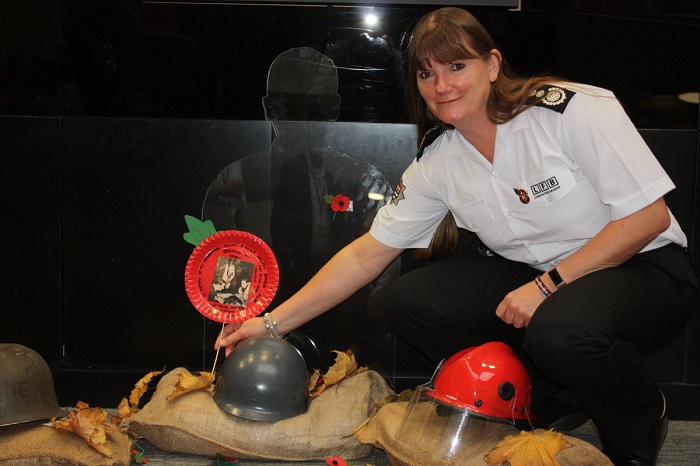 The Brigade will also be marking the event with a number of other commemorations, including a two minute silence for all staff at headquarters at 11am on Friday 9 November. 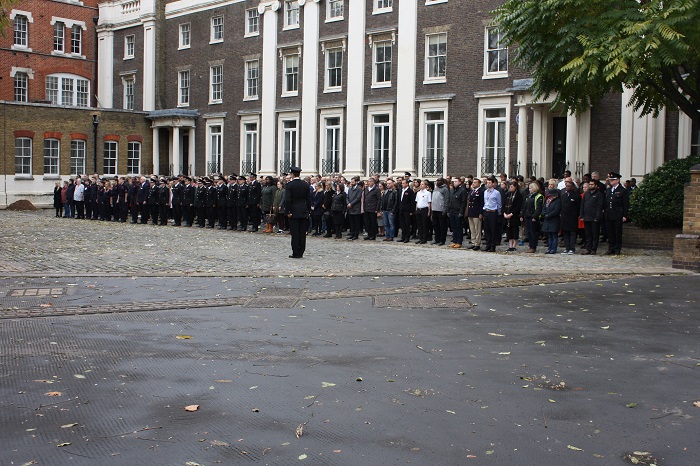 Staff on duty on Remembrance Sunday will be observing a two minute silence wherever possible. Representatives of the Brigade are attending a service at the former Brigade headquarters on Albert Embankment and laying a wreath at the Cenotaph.

Elsewhere, a delegation from the Brigade will be attending a service at St Paul’s Cathedral organised by the Government of Flanders and we will also have attendance at a service at City Hall on Friday, a service of Remembrance in Durham on Saturday and a Remembrance event at the Menin Gate in Ypres.

The charity Remembered raises funds through the sale of Tommy figures and contributes to other charities such as Walking with the Wounded, Combat Stress, Help for Heroes and more.

To donate, go to the There but not There website.

London Fire Brigade is passionate about supporting young Londoners. From having fun and gaining skills with Fire Cadets, through to help for children who set fires, here's where to find out more.