One of the country’s most senior woman firefighters has won two prestigious international academic awards for fundamentally changing the national approach to how fires are fought, to make both firefighters and the public safer.  This week she received her awards in Washington D.C. at the American Psychological Association Convention.

The ground breaking work was published in The Journal of Experimental Psychology: Applied and won a Raymond Nickerson Best Paper Award from the American Psychological Association. The annual international prize is given to the most impactful piece of science and is selected by an eminent group of scientists in the field. 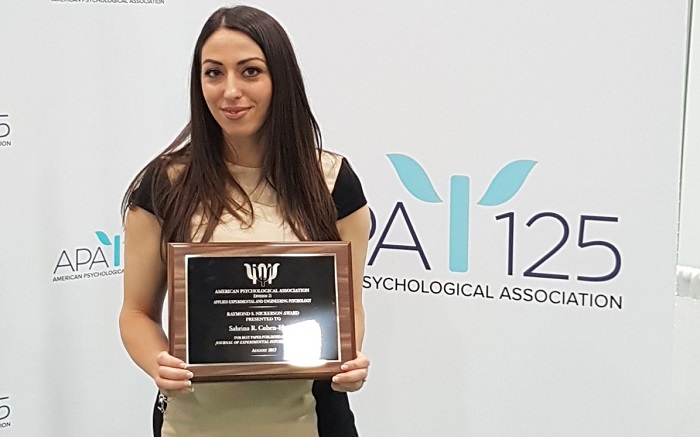 Dr Cohen-Hatton has also been awarded the 2016 Early Career Award from the Society for Experimental Psychology and Cognitive Science (Division 3 of the American Psychological Association). Since 1995, Division 3 has presented awards to honour outstanding new researchers. Each year the editors of each of the five sections of the Journal of Experimental Psychology are asked to nominate individuals based on the editors’ judgment of the most outstanding papers published during that year that were authored by a new scholar. The judges voted unanimously to honour her for her research.

While seconded to the National Fire Chiefs Council (NFCC), Sabrina was working on the National Operational Guidance project  and tasked with improving the way incident commanders make decisions at emergencies. She used her unique dual-role as an operational officer and psychologist to explore decision-making in practice at live operational incidents, which was a world-first in the field. No previous studies used methods that could capture the decision process in real-time, under the pressures of a real-life situation.

The main aim was to improve firefighter safety at incidents and help to improve the way risk is judged in the high pressure, high-stakes emergencies that our officers operate in.  For the first time, the focus of national policy was on the people and not just the process, exploring how an individual judges risk and responds to it. 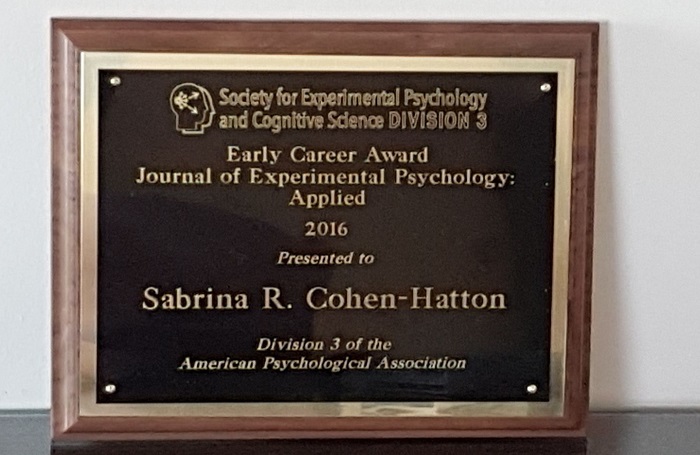 London Fire Brigade Commissioner Dany Cotton said: “It's a huge honour and an amazing achievement for the fire service to be recognised by a leading international scientific journal. This historic improvement in the way the service fights fires has come from within the sector, not by outside agencies or think-tanks, which proves that we embrace change and are at the forefront of improving the safety of our firefighters and the welfare of the public.”

The research led to new national policy changes but it needed to be tested in a scientific way to fully understand whether the applied psychological approach worked in practice. Eighty-four operational officers tested a wide range of scenarios -  half using the old process and the other half with the new guidance.

Fires are down by a quarter over the last five years and this means that firefighters and officers have less experience of dealing with high profile incidents. Decision-making was compared in a virtual reality environment, the training ground and also at live-burns training in residential blocks due for demolition at a former army base in Aldershot. All of the tests were under scientific conditions and the award in the respected psychology journal recognises the approach taken.

The tests showed that the new outlook improved officers’ focus on operational goals, such as limiting damage to property and saving lives, increased situational awareness and crucially, didn’t impact on their ability to make quick decisions.

The Brigade’s Deputy Assistant Commissioner Dr Sabrina Cohen-Hatton said: “Incidents are down but they are no less dangerous or challenging, so our training needs to constantly evolve. This means that we are always looking for the best ways to train, so this work looked at the effectiveness of different kinds of training.

“Around 80 per cent of workplace injuries are caused by human error so by understanding why decisions are taken we can put our psychological theories in to practice and help prevent firefighters from suffering injuries at incidents.

The work has inspired the fire sector world-wide to consider the human factors of incident command with fire and rescue services.  Delegations from as far away as Hong Kong have travelled to London to hear more about how the research can make their firefighters safer.

We will continue to evaluate how our officers react to incidents to keep improving.  Dr Cohen-Hatton has a programme of research that will continue, supported by two PhD students that she co-supervises at Cardiff University.