Proving our firefighters are never truly off duty, Stuart McDonald from Battersea blue watch was travelling on an Isle of Wight ferry recently when he stepped in to assist a fellow passenger who had keeled over with severe chest pains.

Stuart was among the final passengers who were disembarking from the last catamaran from the mainland back to Ryde earlier this month when he noticed the man in front of him collapse.

Trained to give immediate emergency care

Like all our firefighters Stuart is trained to give immediate emergency care – advanced first aid which includes oxygen administration and defibrillation.

Luckily it was a case of the right person being in the right place at the right time and, concerned the man could have suffered a cardiac arrest, he was able to take control of the situation until paramedics arrived. 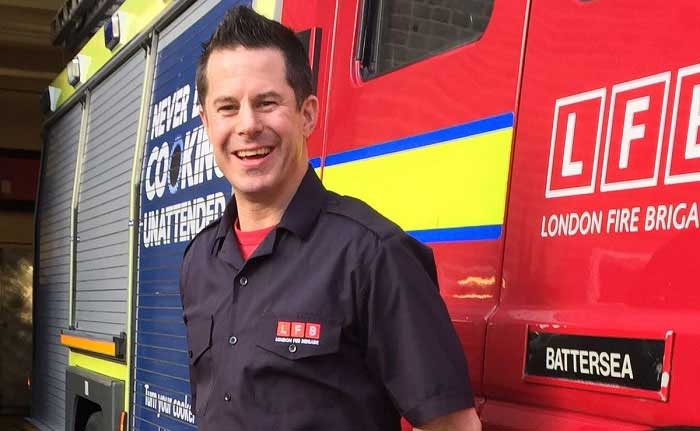 Stuart said: "It was late at night and as I walked around the corner I saw the gentleman suddenly clutch his chest and go down.

"I went over to him with one of the Wightlink ferry guys and sat him down on a chair. I was on the phone to the ambulance service and thankfully I'd already done the things they were asking me to do, such as ask about his medical history and feel for a pulse, which was quite faint and rapid.

"I also asked someone to fetch a defibrillator in case we needed to use it. Thankfully though that wasn't necessary.

"It was freezing so we took the gentleman to a café where it was warmer and then stayed with him until the ambulance arrived. Because it was so late at night there were hardly any people about and if he hadn't been seen it could have been a lot worse. Luckily I just happened to be in the right place at the right time."

Ferry company Whightlink contacted the Brigade this week to thank Stuart for his actions and he is now set to meet company bosses for a special presentation later this month.

Wightlink Ferries CEO Keith Greenfield said: "We are very grateful to our regular customer Stuart McDonald. His prompt action to help a fellow passenger in need was much appreciated by our crew. I look forward to meeting him to pass on our thanks in person."

The gentleman was admitted to A&E but was thankfully later discharged.