A firefighter will this weekend fulfil a seven year dream and march to commemorate the 100th anniversary of the battle of Passchendaele that his grandfather fought in.

Mark Hastings has organised a walk between Poperinge to Passchendaele over two days on 5th and 6th November. Over 60 people from all over the world will join him including fourteen bagpipers from Holland.

Promised to not let him down

Mark served as a mechanic in the British Army for 10 years before joining the Brigade.

Mark who lives in Twickenham said: "My grandfather – Lt Kenneth Herbert Thompson – died in October 1973 when I was nine and I had a very special bond with him.

"His death still upsets me today and I remember making a promise to him that whatever I did in my life I would not let him down. After researching the war I realised how lucky I was to be alive. 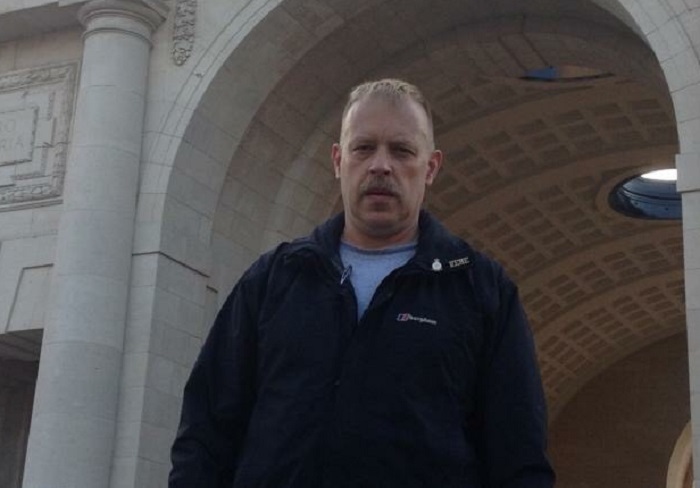 "The Ypres Salient of which Passchendaele was part was a ghastly place, your comrades and enemies could be killed in any number of ways and just sink into the mud in front of you. The ones that didn't sink in the mud just rotted because it was too dangerous to pick them up and bury them.

"When they were finally buried, notes were taken of where they were and passed down the chain of command so that in time the remains could be recovered and given a proper burial. Two things usually happened, either the notes were lost (with or without the carrier) or a shell landed on the grave and the remains disappeared.

"The whole aim of the event is to capture the wish of veterans the world over to express in the strongest possible terms imaginable that we will always remember you and honour your memory."

Nearly 300 London firefighters were called into the armed forces in 1914, with more than half of these personnel returning to their units in the Royal Navy. Firefighters Joseph Knowles and Arthur Shearing have their names on the Menin Gate War Memorial to the missing in Ypres, Belgium.

The Ypres Salient of which Passchendaele was part was "a ghastly place".

The South London Press mentioned at the time that "it seems the irony of fate that Fireman Fay should have gone through the battles of Mons, the Marne and the Aisne…and on re-joining the Brigade on his return should be killed at a fire within a few weeks."

London Fire Commissioner Dany Cotton said: "The level of dedication Mark has put in to securing this momentous is a credit to him, his grandfather and all who served during the Great War. I wish Mark every success and would encourage people to get involved in this once in a life time opportunity."