A Fire Investigator and dog handler is retiring – and taking two of the Brigade’s most famous recruits with him.

Mick Boyle is leaving this week after 30 years with London Fire Brigade and his retirement also means the end of service for Fire Investigation dogs Roscoe and Murphy.

Mick, now 55, joined the Brigade as a Firefighter on Tooting Green Watch in March 1987. 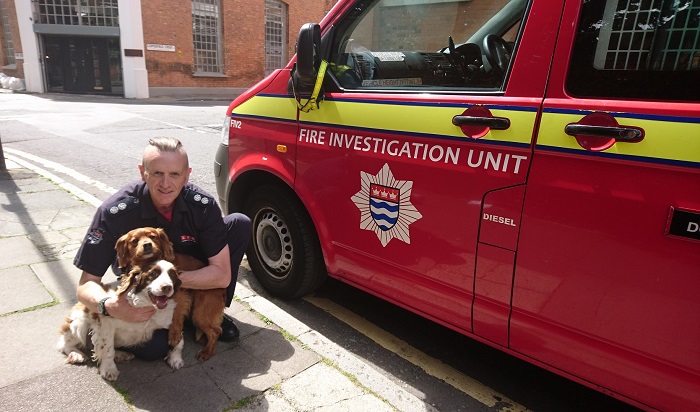 He was promoted to Leading Firefighter at Lambeth and then served as Sub Officer at Mitcham, Wimbledon and Brixton before becoming Station Officer at Battersea.

In 1997, Mick joined the Fire Investigation team which was then based in Clapham, a move he made as he had always been interested in the investigation side of things.

“Putting out fires is a very important part of what we do, but also finding out why fires are happening,” he says.

“As a firefighter watching the Fire Investigation team methodically working through a scene, sometimes of sheer devastation, to be able to pinpoint what caused the fire grabbed my imagination and attention.”

Mick says he couldn’t single out one job he has attended in his 30 years that stands out more than another.

He said: “Every fire no matter how big or how small has an impact – a small fire can be devastating.

“When I have gone to a fire I have never thought it’s a small fire because it’s always about the person that has had the fire – what they have suffered and what they have lost. People lose memories and treasures.

Twelve years ago, Mick’s job as a Fire Investigator changed when he became one of the Brigade’s first dog handlers, taking on springer spaniel Roscoe who was operational after five weeks of intensive training.

Since early 2013, cocker spaniel Murphy has also been operational after just three weeks training – learning even more quickly due to the experience Mick had of Roscoe.

Between them, the dogs have attended more than 2,000 incidents, assisting the Fire Investigation team by sniffing out ignitable materials from a current list of 11 ‘target’ substances.

When Mick became a dog handler, he still wanted to be shift based so the dogs have always accompanied him to all fire investigation jobs.

At 13, Roscoe is taking well earned retirement, while five-year-old Murphy is getting off a little early.

Mick says: “The dogs are all about keeping the people of London safe and they have been an exceptional success.

“Every time I work with them and they find something it gives me immense satisfaction and I’m always amazed.

“I never ever get tired of it when they do find something. I’ve always had a pride in my two dogs.”
“One of my proudest moments was Roscoe being named Animal of the Year by the International Fund for Animal Welfare last year.

“He has done incredibly good work for the people of London and it’s nice he got recognition.”

Talking of his retirement, Mick says he plans to relax and take life as it comes and while he will be sad to go, he’s looking forward to it.

He added: “I have been fortunate that I have been able to do a job I have wanted to do and have also been incredibly happy. The fire brigade has never once disappointed.

“I will miss it but it’s the right time to go - I have got some incredibly good memories and I’m going at a time when the LFB is right up there and incredibly well thought of.”