London Fire Brigade’s Head of Training Assurance, Jackie Adams –Bonitto, has been awarded an MBE (Member of the Most Excellent Order of the British Empire) in the New Year’s Honours list published today (30 December 2017).

Jackie’s award recognises her work for services to the fire and rescue service and to equality and diversity. Her career at the Brigade started back in 1981 when she joined as a clerical officer. She applied for the job when the Brigade was part of the Greater London Council and was allocated to the Brigade.

Jackie started in the Brigade’s Personnel department (now known as Human Resources (HR)), and moved onto the Deputy Chief Officer’s Secretariat, then Operational Policy and Operational Response and returned to HR. She is currently working in the Development and Training Department. 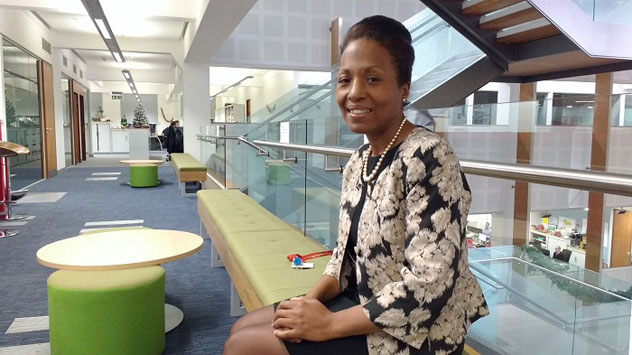 While working in her previous roles she sat on the London region executive committees for Women in the Fire Service and the Asian Fire Service Association.

Jackie, from Thornton Heath, said: “It was a total surprise to receive the letter. I opened it in front of my husband and when I digested the content it brought a tear to my eye as the award certainly wasn’t anything I was expecting.

“I feel I am receiving this not only for me, my family, friends and colleagues but on behalf of all minority staff in the Brigade (i.e. black, minority ethnic  and women). As the highest graded non-uniformed BME woman in the Brigade, I do feel a sense of responsibility to be a good role model for others.

"I feel so proud, honoured and humble but I also want to send a message that if women, particularly from a minority background, work hard they can achieve their goals and it doesn’t go unrecognised. I hope this award inspires others to be the best they can be.”

Jackie says she always looks forward to coming to work. She continues: “I love my job. I have a great boss and a committed and supportive team and colleagues around me. Sometimes there are challenges but nothing is insurmountable.

"Knowing that my role, and that of my team and department, contributes to supporting front-line operational staff to do their job in keeping London and Londoners safe, is very satisfying. I would like to sincerely thank whoever was involved in nominating me.”