Vauxhall Zafira B cars have been recalled for a second time as a "preventative action" due to fire concerns.

Updated figures show that so far this year firefighters have attended 14 Vauxhall Zafira car fires. Since 2013, the Brigade has been called to 120 fires involving Zafira's more than double the number of the previous four year period (2009-2012).

All the figures discounted deliberate fires involving the vehicles.

Vauxhall spokesman said: "While the current action achieves the objective of returning vehicles to their original condition, after extensive investigations we have decided to go further and improve the overall robustness of the system. 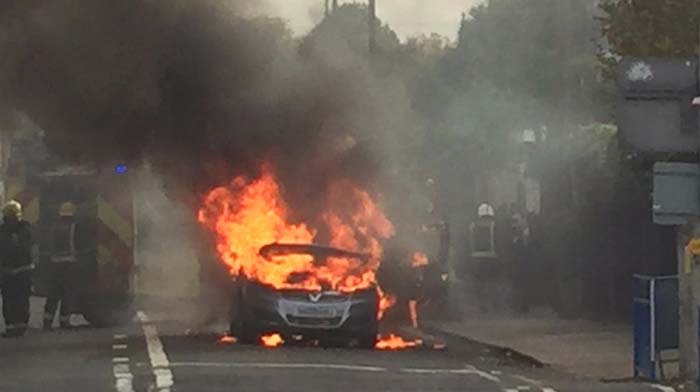 We will therefore be initiating a second recall to replace the current soldered fuse resistor with a wax fuse resistor so reducing the opportunity for manipulation.

"When the recalls are complete, all vehicles will have a new wax fuse resistor, a new blower motor and a new moulding at the base of the windscreen to address water ingress."

What to do if your car's on fire

London Fire Brigade's Director of Operations Dave Brown said: "If you smell smoke or burning coming from your car while you're driving it, you should pull over as soon as you can in a safe place, get everyone out of the vehicle and always stay a safe distance away.

"Then call the fire brigade and never go back to the vehicle while you're waiting.

"If you are concerned that your vehicle is affected by the recall then contact your manufacturer immediately."

Dave Brown continues: "Our insight and analytics team play a vital role in spotting trends and it's fantastic that we've played a part in protecting the public from faults in these cars.

"Part of the role of the analytics team is to help identify trends in fires, be they about fireworks, cooking, or in this case car models.

"We collect a lot of information about each incident we attend and once again this process has payed dividends by using data to contribute to the safety of the general public."