he former cast and producer of ITV drama London’s Burning will today attend the official opening of a brand new fire station on the site where the iconic show was set and filmed.

Dockhead Fire Station was made famous throughout the 1980s and 1990s as the fictitious 'Blackwall Fire Station' in the popular ITV series. The old station, as seen in the show, was built in 1928 and was no longer fit for purpose. It has been replaced by a brand new state-of-the-art station as part of a Private Finance Initiative (PFI) project that has seen nine London fire stations replaced by brand new buildings. 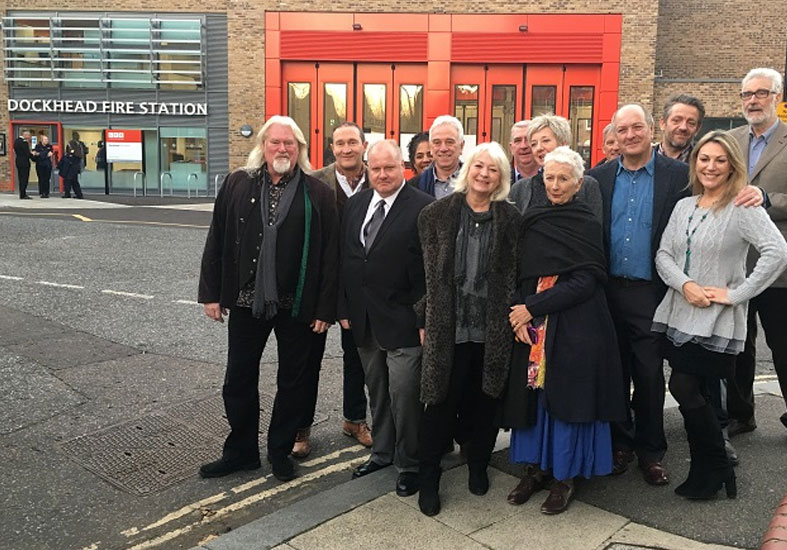 London’s Burning was the first major TV show about the fire brigade and it proved to be extremely popular, regularly attracting an audience of over 19 million people. London Fire Brigade had an enormous amount of input into the show, not only providing an operational fire station as a filming location, but also offering invaluable insight into the life of firefighters and a working fire brigade.

Real off-duty firefighters were even used as extras in some of the most hazardous fire scenes.

London Fire Brigade Commissioner Ron Dobson said: "Characters like Sicknote and Recall wouldn’t recognise this new station which has been completely rebuilt to meet the demands of modern day firefighting.

"Major improvements have been made such as larger appliance bays accommodate more of our specialist vehicles and the shower and rest rooms can be easily modified depending on how many women firefighters are on a particular watch.

"I loved watching London’s Burning and I’m looking forward to meeting the cast members and showing them how the Brigade has changed and improved since the first episode was aired 30 years ago."

The cast and producer, Paul Knight, will be shown around the station, before joining serving firefighters to watch an episode of London’s Burning.

The new station  includes two larger appliance bays which are better able to accommodate the Brigade's latest vehicles, a four storey drill tower for training, offices and meeting rooms, a gym, lecture and quiet study rooms and a kitchen and dining area for firefighters. There are also areas where the public can access important fire safety information, as well as a community room which will be available for bookings.

Firefighters began operating from the new station in May. During the construction phase of the project, Dockhead's firefighters and appliances operated out of Deptford Fire Station.

Mayor of Southwark Councillor Kath Whittam, who is officially opening the station, said: "Dockhead's new fire station is a very welcome addition to the area and will help ensure that our residents have a facility that is fit for purpose.

"I'm pleased to unveil the plaque and officially open this fantastic new fire station which I hope will serve the people in this part of Southwark for many years to come."

The event is private and not open to the public