A London fire engine powered by eight legs will attempt an incredible world record at this year’s London Marathon as part of our 150th celebrations.

On  24 April members of our community safety team; Lee Small, Stevie Clifford-Tucker, Mick Palmer and firefighter Jim Lafferty will be wearing a fire engine costume in an bid to break the world record for the ‘fastest time in a four-person costume’. 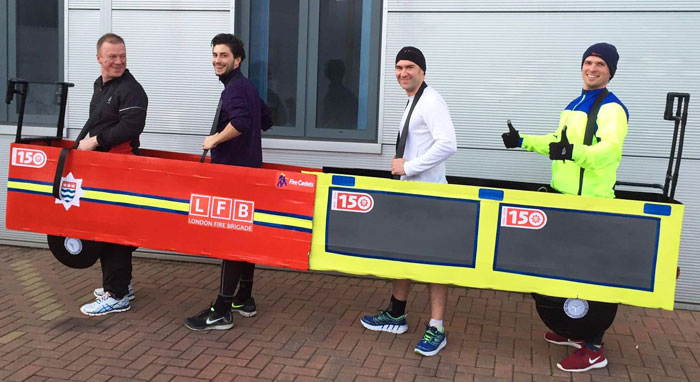 Marketing Manager Ruth Beck will guide the team as they try to smash the current record of  6 hours 23minutes and 3seconds set by Wolverhampton Bobsled Team who dress like the famous Jamaican Bobsled Team.

Watch Manager Lee Small said “It all came about after Stevie saw the bobsled team at last year’s marathon and thought we could do the same with a fire engine. It has taken us 10 full days to build the light-weight plastic  fire engine and we’ve made it look as realistic as possible with the correct branding and it even has lights and a sound system so we can warn people we’re coming.

The London fire engine runners will be among 47 staff are representing London Fire Brigade in our historic 150th anniversary year.

London Fire Commissioner Ron Dobson said “The London Marathon has been a huge part of the Brigade’s calendar ever since the first one in 1981 and this year is extra special for us as we celebrate our 150th anniversary.

Alongside raising money, the Brigade uses the Marathon as an opportunity to promote key fire safety messages to the many thousands of people lining the route and the millions more watching the Marathon at home.”

More of our Marathon runners

Soho Firefighter Frankie Birch is running for the Stroke Association in honour of his girlfriend’s father Chris Hemsworth who suffered a number of strokes before he sadly passed away last year.

David Badillo, stationed at North Kensington, is running for Jade the daughter of fellow firefighter Rob ‘Ollie’ North. Mother of two Jade has been diagnosed with Huntington’s disease and the money raised will be used by the family to create special memories before the disease takes hold.

James Sivell was just 3 and half years old when he was taken ill on holiday and was later diagnosed with a rare kidney disorder. The young James then suffered a stroke which left him being paralysed down the left hand side of his body. He has now made a full recovery and has become obsessed with fitness and is looking forward to the race. The son of a firefighter, James now works in the Brigade’s Information Management team and is raising money for Kidney Research UK.

From Brigade’s Green Champion to super hero Simon Jakeman will be running this year’s marathon dressed as bananaman. Simon is raising money for Royal Marsden in memory of former colleague and running partner Paul Sweny who recently died from cancer. He is also supporting Retts UK a charity that support people with life long neurological disorder also known as locked in syndrome as his cousin’s daughter suffers with the illness.

East Greenwich Firefighter Stephen Irvine is raising money for East Kent Hospital and in particular the still birth unit at Margate hospital. Stephen has been in the Brigade for 10 years and the charity is close to his heart as some close friends have lost their babies and been helped by the hospital.

Mike Barker will be raising money for the British Heart Foundation, while trying to set a new Guinness World Record. The Northolt based firefighter will run the London Marathon carrying a 80lbs backpack, trying to beat the current record time  of 05.53.00.