Three Greenwich fire stations are the first in London to get defibrillators on the outside of their buildings.

The defibrillators at Eltham, Lee Green and Plumstead Fire Stations are part of the London Ambulance's Shockingly Easy campaign

to get more defibrillators across London.

Shops, businesses, gyms and now fire stations have easily accessible defibrillators which will greatly increase the chance of someone surviving a cardiac arrest.

According to London Ambulance Service around 32 per cent of people survive a cardiac arrest in a public place but, where there is a defibrillator and someone trained to use it, the chance of survival can increase to 80 per cent.

Greenwich Fire Borough Commander Matt Herrington said: "I'm delighted that the stations in my borough are the first to receive defibrillators on the outside of our buildings.

"Fire stations are at the heart of the community and the public having easy access to life saving equipment will undoubtedly help save lives." 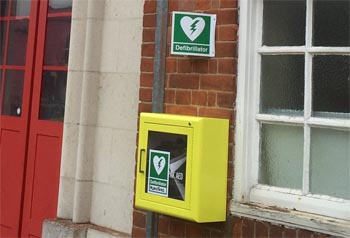 Medical Director Fenella Wrigley said: "We absolutely support more defibrillators in public places and are pleased that our colleagues at London Fire Brigade are placing defibs outside some of their buildings.

"When a public access defibrillator was used in 2014/15, the overall survival rate to discharge from hospital was 58.6 per cent and this is why we would like to see more defibrillators put in strategic locations such as shops, businesses, gyms and schools where they can have the biggest impact."

Since 2011 every fire engine in London has been equipped with new high-tech first aid equipment, including defibrillators, and firefighters are trained to use the potentially life-saving gear.

The kit is used when fire crews are the first emergency service on the scene or where firefighters work alongside paramedics at incidents, especially where victims cannot be easily reached.

It will mean that casualties, particularly at the scene of a fire, can receive a higher level of first aid quicker, giving them a better chance of survival.