We are concerned that a worrying new trend in the United States, called the Fire Spray Challenge, may spread to the UK and is asking parents to talk to their children about fire safety.

The Fire Spray Challenge involves people uploading videos of themselves setting fire to the spray from  an aerosol can.

To date there have been over 4,000 posts on Instagram using #firespraychallenge

The latest craze follows on from a similar trend, the Fire Challenge, which was popular in 2014/15, and involved people pouring flammable liquid over themselves and setting it alight.

after taking part in the challenge.

The London Fire Brigade's Group Manager for Community Safety, Mark Hazelton, said: "A number of young people in the States think that it's clever and funny to set fire to aerosol cans and post videos of the experiment on social media, but I can assure you it's not, it's really stupid and extremely dangerous.

"It could lead to severe burns and could cause a serious fire, especially as many of the videos appear to show young people starting these fires in their own homes. 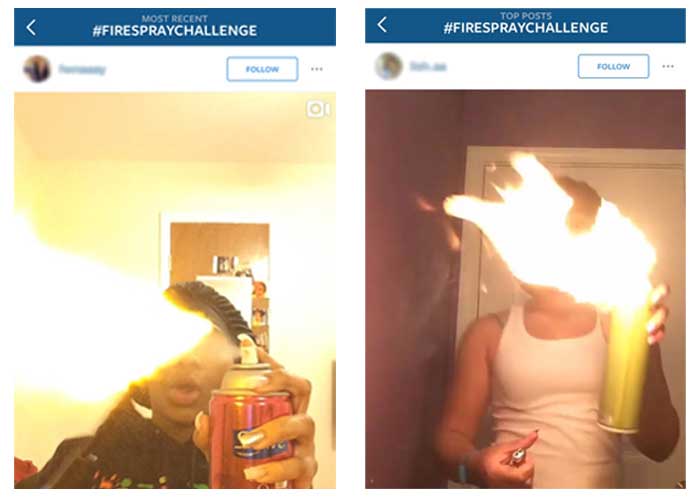 There is apparently no limit to the lengths some people will go to in order to gain popularity on social media.

"It concerns me that these crazes sometimes spread across the Atlantic so I'd encourage parents over here to talk to their children about how dangerous it is to set fire to anything, let alone the highly flammable contents of an aerosol can."

Key things to look out for

We have issued some key things to look out for, for parents or carers who are concerned that their offspring have an unhealthy interest in fire, they are:

Our highly successful course, called the Juvenile Firesetters Scheme, works with children and young people who demonstrate a fascination with fire or who have set deliberate fires in the past.

The service is free and has helped over 3,500 young people across London since it's inception in 2001.

We are also reminding people it is important to have at least one smoke alarm per floor of your home and enough alarms to cover all areas where a fire could start.