Our only father-daughter firefighter duo made firefighting history last week after they were called to deal with a fire together in east London. This is the first time the pair have worked side-by-side as part of the same crew.

We thought that they were the country's only father/daughter firefighter colleagues but we've received information that Essex Fire and Rescue Service achieved this 10 years ago and they both currently work at Epping Fire Station. 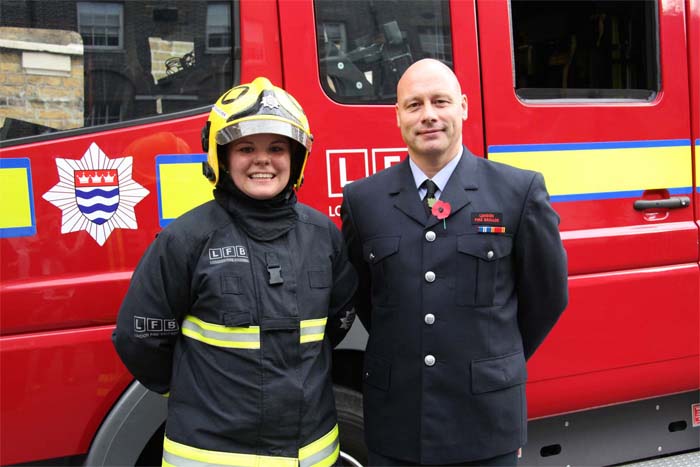 The Brigade is highlighting the unique situation as part of it's 150th anniversary celebrations, where members of the Brigade past and present are being highlighted to show the diversity of the Brigade’s workforce and colourful past.

"It was great working with my dad for a shift. We ended up attending a couple of incidents together, including a fire in a boiler. We both put on our fire gear and the woman whose house it was gave us a very strange look when I called him dad! We had to explain that it wasn’t just a nickname.

"When I joined the Brigade I never imagined I’d get to work alongside my dad, it was brilliant and is certainly something I’ll never forget."

Firefighter plans from a young age

Mark joined the Brigade in 1987 and Victoria joined in 2010. The Brigade played a major part in Victoria's childhood, and she used to spend a lot of time at the fire station with her dad.

She said she wanted to be a firefighter from a young age but due to poor eyesight she thought her dreams would never by realised. Luckily Mark stepped in and paid for her to have laser eye treatment, and as soon as she was able to she applied and passed training school with flying colours.

Of his daughter being a firefighter, Mark said:

"I am so proud of Victoria, she is made for this job - she's a real people person and is strong, determined and always calm in a crisis.

"She has shown that this is as much a job for women as men and she can more than hold her own - she's already been promoted to the rank of Crew Manager. I have no doubt she will go really far in her firefighting career.

"She used to call me for advice but now I often call her!"