A competition to win a once-in-a-lifetime opportunity to ride a zip wire across the Thames launched today in order to raise vital funds for Evelina London Children's Hospital.

On Friday 2 December, for one day only, a team of our specialist firefighters will rig up a zip wire from the roof of St Thomas' Hospital, on the South Bank of the Thames, over to Victoria Tower Gardens, next to the Houses of Parliament on the other side of the river.

Flying 'superman style' in a harness across the Thames, the zip will reach speeds of 40 miles per hour in this one-off daredevil stunt, which aims to raise at least £1 million for Evelina London Children's Hospital, which is on the St Thomas' site.

Win a chance to zip across the river

For a chance to win a place in this once in a lifetime challenge, enter the competition, before 4pm on Tuesday 22nd November.

There is space for 20 of the hospital's most dedicated supporters to pledge £50,000 or more each to take part in the exhilarating river crossing.

The event is also part of the Brigade's 150th anniversary celebrations.

He said: "My son might not be alive today if it weren't for the NHS, especially Evelina London, so I wanted to find a way to thank the remarkable staff at this fantastic hospital.

"During the many hours I spent by my son's bedside, I realised that I could use my specialist skills to rig up a zip wire from the roof of the hospital across the Thames and that perhaps people would pay for the chance to speed across it like a firefighter.

"I've got to warn you, this is not a trip for the fainthearted. 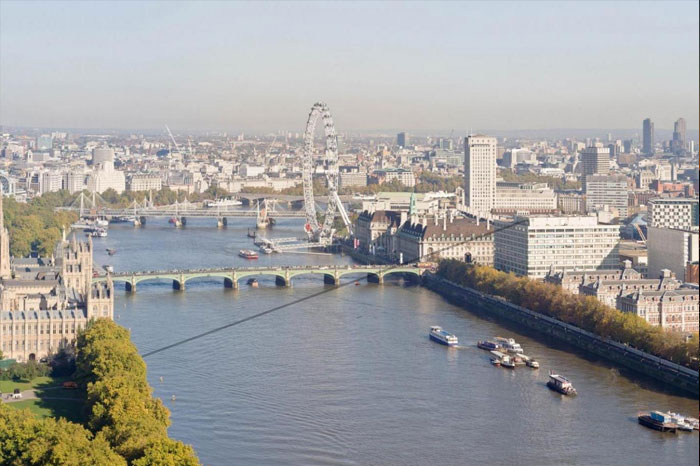 "It will feel like you are flying directly into the Houses of Parliament. There is no other white knuckle ride like it in the world.

"It's great that I have a chance to showcase our firefighters' skills as part of the celebrations for the London Fire Brigade's 150th anniversary. And there's no better way to support one of the leading children's hospitals in the country in helping them to continue their vital work."

The money raised will go towards the £2.7 million needed to build a dedicated Clinical Research Facility at Evelina London.

Raising vital funds for leading children's hospital
Professor Gideon Lack is Head of Evelina London's Allergy Service and hopes to use the new Clinical Research Facility to help prevent all food allergies occurring in children, as well as eventually other allergic diseases, such as asthma and hayfever.

He is going down the zip wire and admits: "To be entirely honest I have a fear of heights, so I'm feeling a bit apprehensive, but I'm very excited about it.

"I'm just delighted to play my part in helping to raise much-needed funds.

"It's only by having a state-of-the-art, Clinical Research Facility with sufficient beds and in an environment that is favourable and friendly to children that we can help find better treatments and cures."

Fundraising initiatives alongside the zip wire challenge also include a two-day Christmas market in the gardens of St Thomas' Hospital, between 1 and 2 December.

Caroline Gormley, Evelina London's Head of Events & Community Fundraising, says: "We are delighted with the response we have already had ahead of London's most daring day of fundraising, and are extremely thankful to all our key partners for coming together and accommodating this once in a lifetime proposition.

"There is still time to donate to Evelina London Children's Hospital, as well as enter our competition, so don’t miss out on your chance to take part!"