Simon’s award recognises his work on sustainability and energy saving as ‘Super Green’ champion for the Brigade.  Over the past year Simon has been encouraging all 412 watches in the Brigade, to embrace environmentally-friendly policies in the workplace. He joined Surrey Fire and Rescue service in 1995 and transferred to the London Fire Brigade in 2007 and has served at Surbiton fire station for eight years. 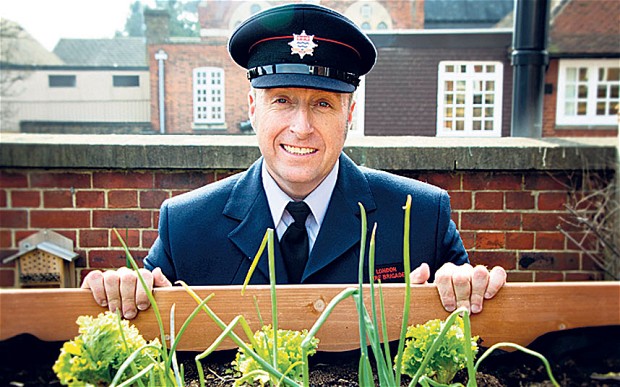 Peter’s award recognises his work creating “Crossfire”, a multi agency community engagement project designed to reduce hoax calling, deliberate fires and anti-social behaviour (ASB), through education and direct partnership working. Set up 13 years ago, predominantly to tackle the high number of hoax calls and non-accidental fires in the borough of Croydon, the project is currently working in partnership with around 25 agencies and is being rolled out into other London boroughs.

Peter served as a firefighter for 30 years at New Addington fire station, he retired but now works for the Brigade’s Education team on the “Crossfire” project.  Peter has raised over £500,000 in funding since the project’s inception, in order to sustain the project financially.

Peter (63), from Croydon, said: “I’m completely shocked, it’s very humbling to receive this award.  It’s a feather in the cap for the project as a whole and everybody who has been involved with it.  I feel very proud.

“The project started because fire engines kept getting attacked and something needed to be done.  It’s really nice to be publicly acknowledged for what I’ve achieved.”

Simon (44), from Chessington, said: "I am totally amazed. In fact, lost for words and feel really honoured to be recognised for my green work in the New Year’s Honours List. I’m just doing my bit.  To think this all started with one tomato plant in a fire bucket on a fire station roof!”

London Fire Commissioner Dany Cotton said: "I am very pleased for Simon and Peter and these awards are a fitting recognition of all their hard work and achievements.”

The Mayor of London, Sadiq Khan, said: "I am delighted that Peter and Simon's hard work has been recognised with these well-deserved honours. Not only have they been willing to risk their lives as firefighters to help keep Londoners safe, but their exemplary work has helped to make London’s Fire Brigade more environmentally friendly and reduce pressure on the service from anti-social behaviour. They have made a real difference to London’s communities.”