A new BBC virtual reality (VR) film depicting a terrifying Christmas Day fire will be given its UK premiere today at our new pop-up museum in Lambeth. The film, titled Fire Rescue, immerses viewers in the dramatic real-life story of a crew of firefighters who rescued six children from a house fire on Christmas Day in 2012.

Stepping aboard a fire engine to try the immersive experience, viewers are transported via VR headsets to a flame-filled bedroom, witnessing the sights and sounds of the roaring fire taking hold and the terrified screams of the children inside.

The film stars Crew Manager, Paul Rich, and his colleagues from the red watch at Southall Fire Station. Paul took the split second decision to put his own life on the line by climbing through a window and rescuing five children from a smoke-filled bedroom.

Firefighters wearing breathing apparatus rescued the sixth child from inside the house. Thanks to Paul and his colleagues’ quick-thinking actions, none of them were seriously injured.

Paul, who was named as ‘Firefighter of the Year’ following his actions at the fire, said: “This is a fire I will never forget. We knew as soon as we arrived on the scene that a number of children were involved and could already see the flames inside the house. 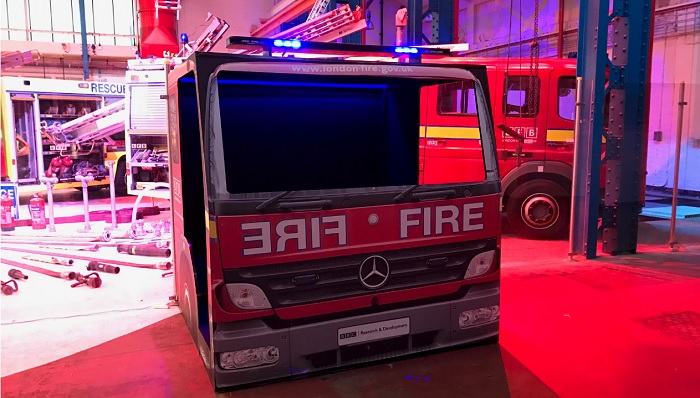 “We had to act fast to save lives, which is why I didn’t hesitate in climbing straight up to the bedroom window when I heard the crews inside were struggling to get through the smoke and chaos to reach the children.

“As well as hopefully teaching people about fire safety, I hope this film will give people a real insight into the working lives of firefighters and the dangers we face every day.”

London Fire Commissioner, Ron Dobson, said: “This remarkable film is the most realistic representation of being at a real fire that I have seen. We have never been able to show people what it’s really like before so this is an excellent way to highlight  the dangers and difficulties our firefighters face at the scene of a fire.

“It’s all about making the right decisions swiftly to save lives, and that is exactly what Crew Manager Paul Rich did on that day.

“I anticipate the fire service embracing virtual reality more widely in the future, I can certainly see it being used for things like firefighter training.”

Directed by Peter Boyd Maclean and produced by BBC Research and Development (R&D) and BBC News Labs, the documentary immerses the viewer in the experience using a VR headset. The film creates a strong sense of what it would be like to be alongside the firefighters by recreating the fire using more than 500 layers of special effects.

Zillah Watson, executive producer, BBC R&D, said: “Fire Rescue uses reconstruction and special effects to put viewers at the heart of the action, giving them an unparalleled insight into this terrifying real-life situation and what the London Fire Brigade’s brave firefighters go through on a daily basis.

“This new type of immersive filmmaking presents an interesting challenge regarding storytelling in 360 degrees, and the result in this case is a powerful viewing experience. However, the benefits of VR aren’t purely limited to entertainment and awareness, the technology could also have significant practical applications as a safe but realistic training environment for firefighters.”

Following the premiere, the VR headsets will become a feature at the Brigade’s free pop-up museum, and the film will be available for viewings by members of the public.

The Brigade said it is part of a drive to use new and innovative ways to educate people about fire safety, both at the pop-up museum, and the permanent museum that will eventually replace it. The VR headsets have been  provided thanks to a grant from London Museum Development.

The pop-up museum is based in The Workshop

behind the Brigade’s original headquarters building at 8 Lambeth Embankment. Alongside modern day fire engines, it offers visitors a rare opportunity to see the Brigade’s video and photographic archives.

The Brigade said its fire investigators believe the Christmas Day fire was caused by a joss stick.