Firefighter Mat's 'amazing' bake off adventure comes to an end

Firefighter Mat's 'amazing' bake off adventure comes to an end

Firefighter Mat Riley has gone from baking a few cakes for his watch to showing his talents in front of millions on this year's Great British Bake Off.

Despite Mat not being the most knowledgeable of baker he did exceptionally well at reaching week 7. Winning Star baker in week 6 was a highlight as well as having an army of supporters using #TeamMat on Twitter.

Mat said: "I was only one episode away from the semi-final and considering I didn't think I would get to week two, that is pretty amazing. I bake for the station all the time and my colleagues have given me really good support.

"I was expecting a bit of ribbing but it hasn't happened so far."

The Brigade used Mat's appearance on the show to warn about the dangers of cooking fires. Nearly 60 per cent of all fires in the home start in the kitchen and half of them are caused by cooking. Become star baker by taking on board our cooking fire safety tips.

Despite seven shots of gin Mat's madeira cake didn't have enough gin flavour for Mary 'Merry' Berry and then when his walnut cake was described as "granular" he could have been the first one fired. But his "exceptionally good" showstopper means he's safely through to next week. Sound the smoke alarms in celebration.

Firefighters love a cup of tea so biscuit week was made for Mat. Great biscotti and a French biscuit which allowed Mel and Sue to mention our colleagues in blue - Arlettes be having you - meant Mat was in the running for star baker. Making a fire engine biscuit box which the judges labelled as fun and fantastic Mat was safely through. Sadly star baker was not meant to be but sound the alarm he's through to week 3.

Bread week sent Mat into doughverload and nearly out of the competition. The incident packed episode saw Mat's first bake being overworked, his baguettes being off coloured and his Brighton Pavilion showstopper though tasty lacked an extra 10 minutes. Some of these errors could have been avoided if Mat had listened to his wife who told him to keep it in 10 minutes longer. Besides dropping his rolls and Paul Hollywood telling him to raise his game he lives to fight another day. Pull your finger out like Mat and test your alarms.

Would Mat get his just dessert? First up was the 1970s classic Crème brûlée, thankfully fire safety work has helped reduce fires dramatically since those days but back to his bake. Sadly his coconut and lime favoured ones weren't a hit. Neither was his European meringue although that wasn't surprising as he thought Angel Delight was Austrian. But he rose like a phoenix from the ashes in the showstopper with his 'fantastic trio' of cheesecakes. Saved for another week, your smoke alarm can save you so make sure you test it regularly.

The bake off this week coincided with the 349th anniversary of The Great Fire of London. Thankfully had a much better time than poor old Thomas Farynor who's Pudding Lane bakers started the blaze back in 1666. History lesson over, it was alternative week and a quiet time for our Mat but highlights were his carrot cake that was more like a pudding, his pitta's which were marked as 4th best and an ice cream showstopper without much ice cream. Safely through, sound the smoke alarms.

Pastry week enabled us to ask anyone getting pie-eyed to get a takeaway rather than cooking drunk. Alcohol again featured in Mat's bakes as he attempted a pina colada frangipane. And for the second time this series it still didn't have enough booze for Mary 'Merry' Berry. The technical challenge brought together the unusual combination of sultanas and cheese. Mat's flaunas (no we've never heard of them before either) were the best in show. Things got even better for Mat as his vol-au-vents were praised by the judges. This led to smoke alarm sounding across London in celebration of Mat winning star baker.

In the week the museum said goodbye to Southwark for the last time it was fitting that the bake off went back in time to Queen Victoria's rein. Mat kicked off with a game pie but the star of the show was an old tin kindly donated by 'Dangerous Dave's' mum. Sadly the pie didn't live up to the quality of the tin. Next up was a Tennis Cake which set Mat his most challenging bake of the series. When Mat decided to put his icing in the oven he received a volley of abuse and finishing last meant that it was pretty much game, set and match. Once his lady fingers buckled in the final challenge Mat shout, "Taxi!" The fantastic adventure was over. 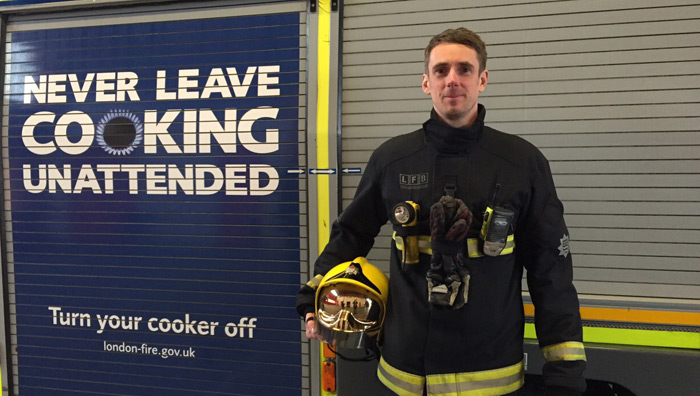