As part of the Brigade's commitment to reducing carbon emissions, charge points have been installed at 71 fire stations and at five other Brigade sites, one of which has had three charge points installed.

Members of the public can use the charge points at Croydon, East Ham, Edmonton, Finchley, Hainault, Harold Hill, Hornsey, Ilford and New Malden fire stations from today and can register for access and unlock the charge points on the spot via their smartphone.

Last year, the Brigade secured £592,000 of government funding to cover 75 per cent of the total cost of installing 78 charge points. The remaining cost was covered by Chargemaster, who were appointed following a competitive tender to install and manage the charge point sockets.

London Fire Commissioner Ron Dobson, said: "I am delighted the Brigade's electric vehicle charge points have been installed across London and are now ready for use by both Brigade staff and members of the public.

"Electric cars offer big environmental benefits and play an important part in keeping London clean. The new charging network not only makes it easy and convenient to charge up a car's battery making electric cars easier to use, but also reaffirms London Fire Brigade's commitment to lead on sustainability in the fire service and reducing our impact on the environment."

The Brigade currently uses five electric cars through its lease car scheme and hopes to have a further five in its fleet towards the end of year, as a result of additional government funding secured from the Office for Low Emission Vehicles. 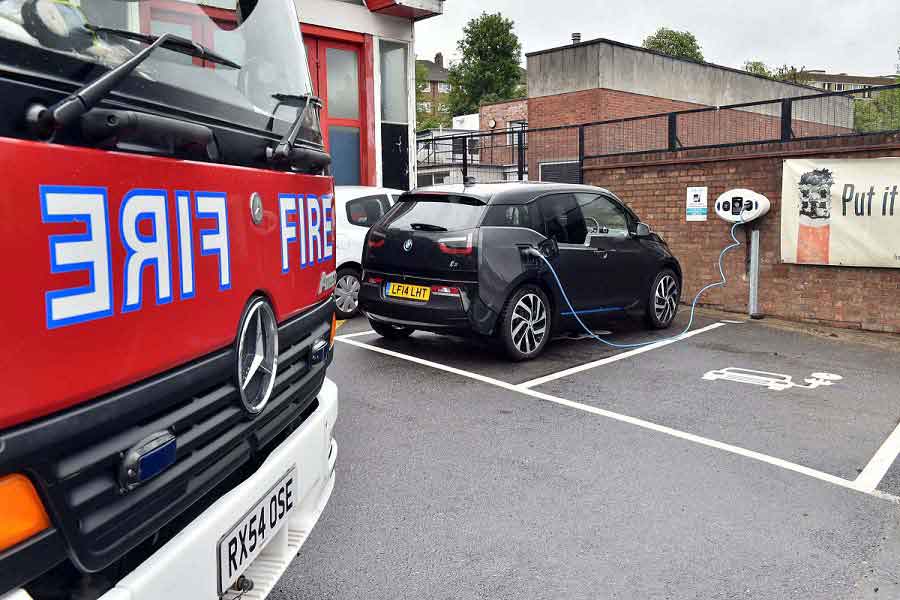 Chargemaster CEO, David Martell, said: "We are proud to have worked with London Fire Brigade to expand the charging network available to electric vehicle users in the city. All charge points were installed on schedule and are now part of the UK's most reliable charging network.

"We are committed to increasing the uptake of electric motoring in the UK and to make it as convenient as possible for motorists."

The cost of using the Brigade's new charge points will be dependant on the Chargemaster tariff chosen by the driver. Charging is from the time the connector is plugged in to the time it is removed, rounded to the nearest minute with a minimum charge of one hour. The tariff has been set on a cost recovery basis.

has a 24 hour customer service number displayed in the bay and on a  swipe card issued to drivers, which users can ring if they are having any difficulties using the charge points.