London fire chiefs say that the sprinkler system Sainsbury’s had installed helped prevent potentially devastating damage to its distribution depot in Charlton after a blaze broke out on the site on Monday afternoon.

70 firefighters to control the blaze

The Brigade was called to the fire in Sainsbury’s Thameside Depot on Lombard Wall in Charlton at  1608 and the fire was under control by 1829.

Ten fire engines and over 70 firefighters tackled the blaze which started in a lorry parked in one of the loading bays outside the warehouse before spreading to six other lorries and part of the depot’s wall. The cause is under investigation.

Thick black smoke from the fire could be seen for miles around but we believe the activation of sprinklers inside the building, and the quick actions of its firefighters, prevented the blaze from spreading  further into the warehouse. 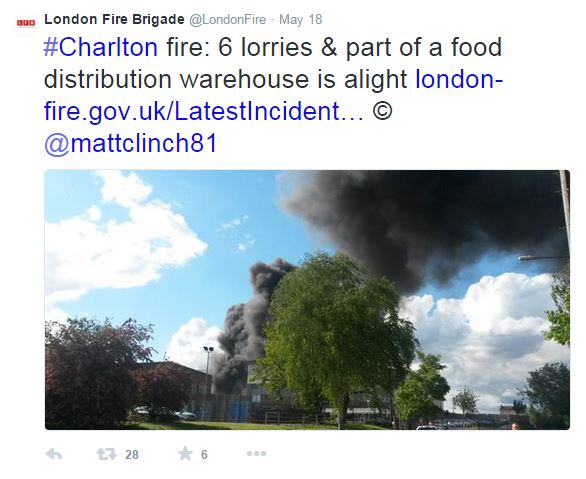 Prevented a much more serious fire

Deputy Assistant Commissioner Mark Andrews said: “There is absolutely no doubt that in this case the sprinkler system, along with the quick actions of our crews,  prevented a much more serious fire from spreading any further into the depot and causing potentially millions of pounds worth of damage to both  the building and stock inside.

“This incident highlights the clear benefits of sprinklers to businesses and we would urge all companies to install them. As well as being potentially life saving devices, sprinklers and other fire suppression systems help with business continuity by minimising disruption and allowing businesses to get back to normal as soon as possible.”

An independent study by  independent third party approval body, BRE Global, commissioned by the Business Sprinkler Alliance, has found that each year one in five warehouses in England will have a fire requiring the attendance of firefighters and that the total annual cost to the UK economy of fires in English warehouses without fire sprinklers is £232 million.

To reduce the devastating effect fires can have on people and property, we're campaigning for business owners, care providers and housing developers to fit sprinklers in commercial premises, residential care homes, housing and schools.

If you manage or operate a business, charity or other organisation you might be interested learning about the Primary Authority Scheme.