A landlord who rented out bedsits above a car workshop was ordered to pay £25,000 in fines and costs for breaking fire safety laws. The prosecution marks a first for the Brigade who successfully argued for £5,000 of the ill-gotten gains he received in rent to be confiscated.

Irshad Ibrahim pleaded guilty to 10 offences under the Regulatory Reform (Fire safety) Order 2005 and was sentenced at Kingston Crown Court on Wednesday, 5 March.

London Fire Brigade says the case highlights the increasing problem and fire risk of unsuitable buildings being rented out as sleeping accommodation in the capital. Properties such as disused pubs, so-called ‘beds in sheds,’ garages or industrial units  are all potentially lethal fire traps as it is inevitable that people living in them will rely on far riskier ways of heating, cooking and lighting.

Mr Ibrahim owns the single storey industrial unit on Crusoe Road in Mitcham and let five bedsits above. Following neighbours ‘complaints, a joint investigation of the site was carried out between the police, local authority and the Brigade on 31 May 2012.

During the fire safety inspection, the Brigade identified a number of serious fire safety concerns and issued a prohibition notice preventing the building’s upper floor from being used for sleeping and evacuated the residents.

Concerns raised by fire safety inspectors included wholly inadequate fire separation of the bedsits and only one single escape route from the commercial premises. There was also no fire risk assessment, no fire safety arrangements between the commercial and residential parts and no emergency lighting.

“This verdict should serve as a stark warning to landlords who rent out unsafe, unsuitable living conditions to some of the capital’s most vulnerable people. Landlords have a clear responsibility under fire safety laws to ensure that people living and working in their premises are safe from the risk of fire.

“If we find people  are ignoring these responsibilities we won’t hesitate to prosecute and the sentence handed down in this case shows that the courts take these matters just as seriously as we do.”

“This example is a result of successful collaboration between London Fire Brigade, the local council and other enforcement agencies – an approach which the NLA has long argued is the best way to root out the criminal operators that bring the wider landlord community into disrepute.”

The Brigade recovered £7,000 of legal costs. 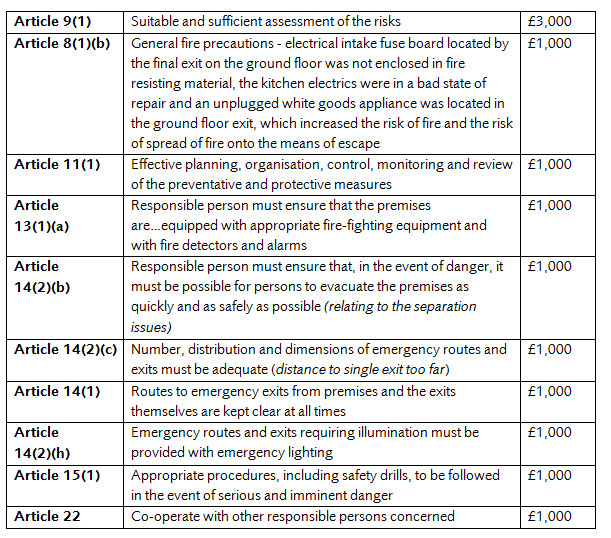