Deliberate fires down by 90 per cent in a decade

Deliberate fires down by 90 per cent in a decade

Deliberate fires across the capital have dropped by nearly 90 per cent over the last decade, according to new figures released today by London Fire Brigade.

The Brigade has set up a number of schemes which have helped the reduction of deliberate fires. Firefighters are also working closely with local authorities to remove abandoned vehicles and fly tipping from the streets.

The sharp decline in deliberate fires can also be attributed to the increasing scrap value of motor vehicles making it less likely that they will be abandoned and therefore subject to arson. Figures produced by LetsRecycle.com show that the price for light iron has increased by £120 per tonne in the last 10 years. The metals recycling sector is worth around £5.6 billion to the UK economy.

European Union (EU) legislation has also brought about a reduction in the number of old cars dumped on London’s streets. The EU ‘End of Life Directive’ which came into force in 2005 tasked car manufacturers to set up agencies to recycle cars for free when they came to the end of their driving life.

“Over the last decade the Brigade has worked extremely hard alongside its partners in the police and local councils to make it more difficult than ever for mindless vandals to endanger the lives of Londoners by setting fire to rubbish and vehicles left in our streets.

“We cannot be complacent though and I would urge anyone who sees an abandoned vehicle or dumped rubbish to report it to their local council, which will help get it removed so it cannot become a target for would be arsonists.”

The Royal Borough of Kensington and Chelsea has seen the biggest single decrease, with 94 per cent fewer deliberate fires than 10 years ago.

Councillor Nicholas Paget-Brown, Leader of the Royal Borough of Kensington and Chelsea, said:

“I am very pleased there has been such a big decrease in deliberate fires in the borough.  Our twice weekly domestic rubbish collections and regular street cleaning helps remove the materials that people can use to start fires, as does the work our officers do in spotting potential problems and reporting them. I am sure our officers and residents will continue to work closely with the London Fire Brigade to help keep our community safe.”

Further Brigade initiatives include the Juvenile Firesetters Intervention Team (JFIS), which works with young people who show firesetting behaviour and London’s fire investigators work with the police to identify arson and bring arsonists to court.

LetsRecycle.com is the leading waste management and recycling sector news and information website. 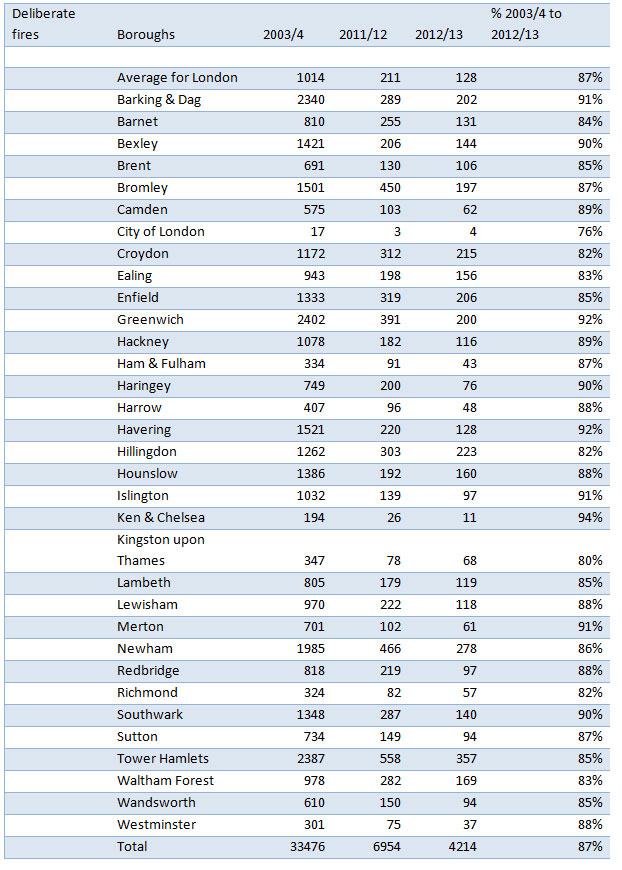