Brigade warns don't give arsonists the chance to strike

Brigade warns don't give arsonists the chance to strike

We’re warning of the dangers of leaving mattresses and other materials stacked up against the outside of your home presenting an opportunity for would be arsonists to strike.

This is what appears to have happened at a house in Lorne Road, Walthamstow, in the early hours of this morning, where firefighters wearing breathing apparatus tackled a large fire in the front garden of the property.

Most of the garden and the majority of the ground floor bay window’s fascia were damaged by fire, but there were no reports of any injuries.
The fire damaged a number of items in the front garden including two mattresses, two fridges and other discarded items. 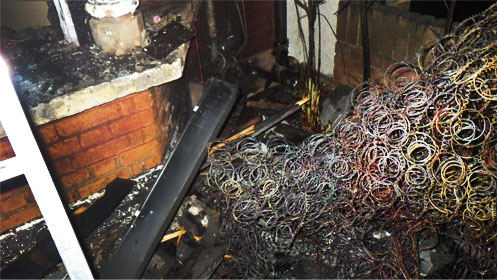 "a devastating affect on local communities"

“We have attended a number of fires involving discarded mattresses which have spread to properties and endangered lives.

"Fire related crime can have a devastating affect on local communities and puts people’s lives at risk. Not only that, arson incidents are a drain on our valuable resources. We work closely with the police to help bring arsonists to book."

We were called at 01.52 and the fire was under control at 02.40. Three fire engines from Walthamstow and Leyton fire stations attended the incident.