Puppy rescued by firefighters from blaze at Harlesden cannabis factory

Puppy rescued by firefighters from blaze at Harlesden cannabis factory

A puppy was rescued by firefighters after a blaze broke out at a suspected cannabis factory in Harlesden on Sunday.

Crews were called to a terraced house in Nightingale Road, NW10, and were met by a neighbour who was concerned someone may have been inside the property.

Firefighters wearing breathing apparatus forced entry into the property and found nobody inside, but a puppy was found cowering in a ground floor room.

The puppy, which fire crews nicknamed Smokey, did not suffer any serious injuries and was taken to safety and given oxygen by firefighters. 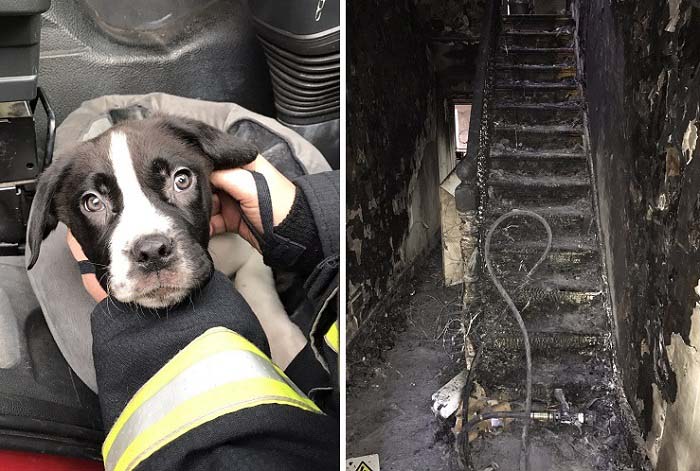 Smoke alarms were fitted in the ground and first floor hallways but neither sounded as their batteries had been removed.

Simon Tuhill, the Brigade’s Borough Commander for Brent, said: “Thankfully Smokey the puppy was not seriously injured in this fire after a neighbour raised the alarm.

“It appears the fire had been going for some time before the alarm was raised and crews faced very difficult conditions when they forced entry into the property.

"Cannabis factory fires can be very severe because of the way criminals use unsafe wiring to illegally obtain electricity in order to grow the plants.

“Fires at cannabis factories are also extremely dangerous to crews because of bad wiring and booby traps at some of the properties. Despite being faced with dangerous and difficult conditions, crews did exceptionally well in bringing the fire under control.

“In this instance, there were also no smoke alarms in the property. Smoke alarms provide a vital early warning and buy you extra time to escape if there is a fire. Not only can they alert people in the property, but they can also help to alert neighbours.

“Everyone should have at least one smoke alarm on every level of your home and the safest option is have those linked together. This will give the earliest warning if there is a fire in your home.”

The Brigade was called at 0612 on Sunday (February 19) and the fire was under control at 0852. Two fire engines from Willesden and Park Royal fire stations attended the scene.

The fire is under investigation by the Metropolitan Police Service.