This tragic fire prompted the Brigade to alter its policy on firefighter breathing apparatus (BA).

One the London's worst fires since the Blitz

Two firefighters lost their lives at a tragic blaze at Union Cold Storage Co. at Smithfield Market, which broke out on 23 January in 1958. The fire burned for three days in the centuries-old labyrinth, which ultimately collapsed.

According to news reports at the time, when the first fire engines arrived, thick acrid smoke was pouring out of the market's maze of underground tunnels leading to cold storage rooms.

This newsreel from the time reveals the dramatic events, and explains the unique circumstances that made the Smithfield Market fire so challenging. 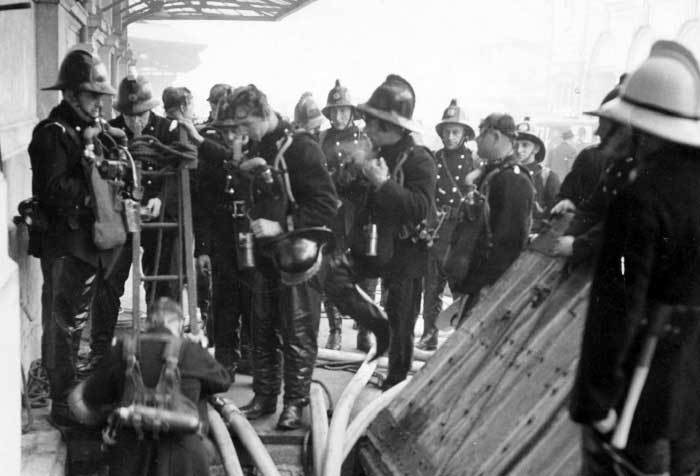 One of the first crews to enter in Proto breathing apparatus sets was that from the local station, Clerkenwell.

A Station Officer and a firefighter headed down into the dense smoke, never to be seen alive again. Once inside the pitch black labyrinth of basement rooms and small passages they searched in vain for the source of the fire but with their breathing apparatus rapidly expiring, were overcome by the thick smoke. Their colleagues found them amongst the frozen meat packets and carcasses, and immediately got them out of the tunnels. Many attempts were made to resuscitate both men but tragically they were pronounced dead at the scene.

A firefighter who knew Fort-Wells remembers him...

...he was one of the old 'smoke-eaters' who would not give up hunting for the seat of a fire. 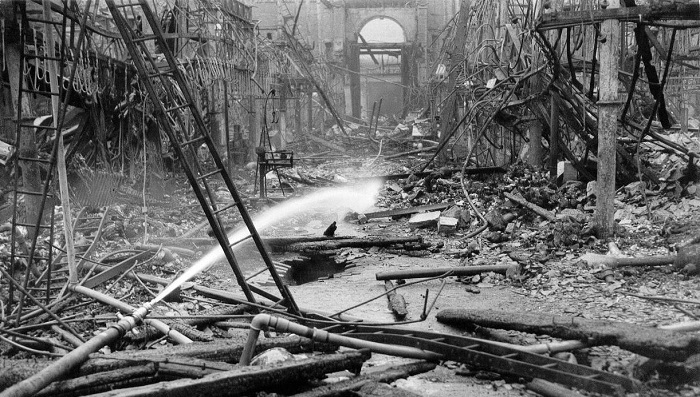 What changed after the Smithfield fire?

It took 1,700 firefighters many days to combat the blaze. During the course of the incident, over 389 fire engines and other support vehicles either attended the fire or were moved across London to provide relief and fire cover.

Around fifty other firefighters from stations across London were injured or treated for smoke inhalation.

The tragic events prompted the fire brigade to change its policy on breathing apparatus (BA) introducing BA boards with tallies and systems to keep track of the location and time spent inside by firefighters once they had entered a burning building. A BA Controller would now have responsibility for managing these systems, ensuring firefighters did not run out of oxygen. Later BA sets had compressed air cylinders and an alarm to warn the firefighter when oxygen was running low. These systems and protocols are still in use today.

The Tooley Street fire is often referred to as the greatest fire since the Great Fire of London.