In the early hours of the morning of 6 June, the Brigade was called to a fire at the six-storey Leinster Towers Hotel, Leinster Gardens... 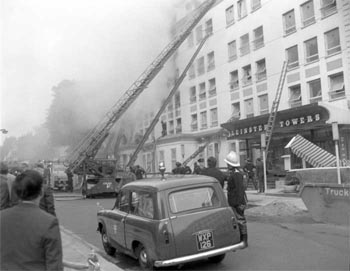 The Brigade was called to a fire at the six-storey Leinster Towers Hotel, Leinster Gardens.

The fire began on the first floor and quickly spread. When crews arrived, firefighters saw smoke billowing from the upper-floor windows and the scale of the operation quickly escalated.

Night-time hotel fires can be very dangerous because residents may be disorientated don't know their escape routes – but thankfully, firefighters were on the scene quickly.

People were screaming from every window... 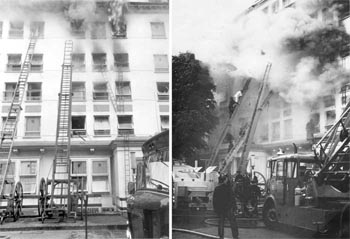 The escalation of the firefighting operation

All rescues complete within 25 minutes

Around 120 people were in the hotel at the time of the fire and firefighters used various ladders and lowering lines to help bring people to safety from windows at the front and rear of the building. 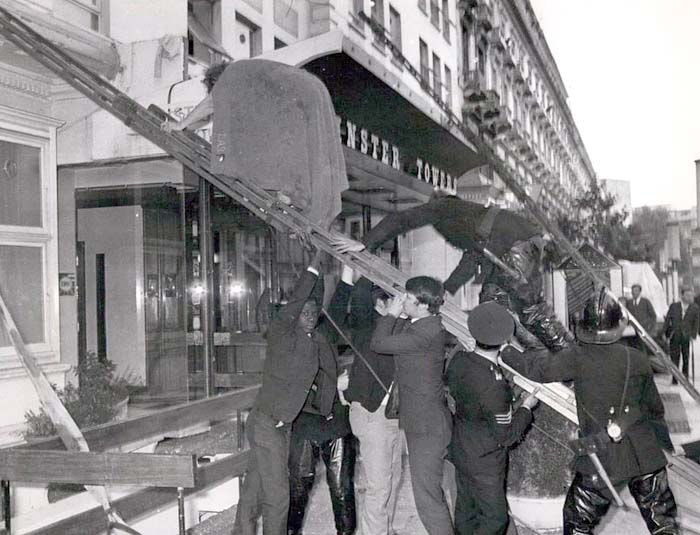 Despite the blaze destroying a significant part of the building, only 16 people were taken to hospital with minor injuries.

Thirty fire engines and around 150 firefighters tackled the blaze and, although parked cars had caused access problems for crews, all rescues were completed within 25 minutes of the first call.

Following the fire, Station Officer Alex Pilbro, of the newly opened Paddington Fire Station, was commended by Chief Fire Officer Leslie Leete for "outstanding officership in organising firefighting and multiple rescues in the early stages of the fire."

Leete issued his first ever special order that described the fire as being:

without parallel in the Brigade's history for the magnitude of the task...and the excellence of the firefighting work performed.

The Tooley Street fire is often referred to as the greatest fire since the Great Fire of London.