During WW2 the National Fire Service were part of the top secret mission, ‘Operation Colour Scheme’

Today marks the 75th anniversary of the D-Day landings on 6 June 1944, when Western Allies launched one of the biggest seaborne invasions in history to liberate occupied France.

‘Operation Colour Scheme’ involved the secret movement of 11,000 firemen and women, with over 1200 appliances and equipment, in less than a week, to protect ‘Red’, ‘Brown’ and ‘Green’ zones. These included ammunition dumps, petrol pipe lines and an enormous armada of ships in the lower reaches of the River Thames, poised for the invasion of France.

Many fireboats from the River Thames Formation were assigned to protect American Liberty Ships anchored in the docks, some of which contained up to 2000 tons of explosives. It is a testament to the planning of NFS and Military Commanders, that this incredible concentration of resources remained secret, and was never subject to enemy attack.

Whilst this was happening, another top secret operation was underway. Enormous concrete structures were built at Surrey Docks and along the north bank of the Thames. These ‘Mulberry Harbours’ were designed to be floated across the Channel to France to form two temporary ports to support the landings. When the time came to release these into the Thames, several NFS units, sworn to secrecy, were tasked with washing away the colossal mud embankments that had been built to prevent river water from entering the construction sites. Once the walls were washed away, the harbours were floated out ready for transport.

Get up-to-date with our history

The victory of the NFS in protecting the invasion force and keeping the Mulberry Harbours a secret was short lived. Only a week after the D-Day landings, the first V1 flying bomb landed in London, followed soon after by enormous V2 rockets that caused mass destruction. The NFS dealt with over 500 rocket attacks on London, until the last V2 fell on 28 March 1945. 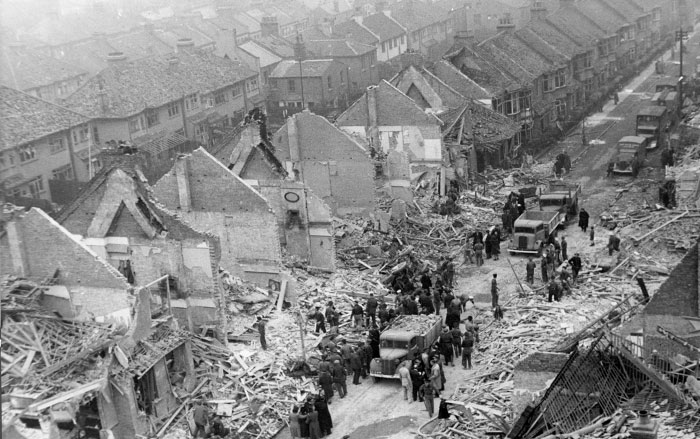 During the Second World War, the fire service was initially run by local authorities, supported by the Auxiliary Fire Service (AFS). In 1941, due to the impact of the Blitz on London, the fire service was nationalised to become NFS. The whole of the country was split into Fire Force areas, of which London was area 33 (later including 34-38). It had become clear that in order for help to be sent across the country, a standardised, centrally controlled national service would be more effective.

In 1943, Sir Frederick Delve became Chief Regional Fire Officer for London (No.5 Region). As news spread of deadly new weapons and long range missiles being developed by the Nazis, London’s firefighting forces were split into two.

These people would fight regular fires in London.

Delve used his position to petition the Home Office for more advanced radio communications, which happened to be his area of expertise. He began by equipping the River Thames Formation, some 70 vessels that up until this point, could not be contacted in darkness, with the latest radio technology. In the build up to D-Day - this investment proved invaluable.

Our museum is on the move

Find out how we're moving from our temporary pop-up museum to a new, state-of-the-art permanent museum.