"I always knew I was definitely going to apply as soon as the fire brigade recruited and regardless of what job I was doing, I was going to let it go," said Emmanuel.

He became a firefighter in 2015, realising a dream he had held since he was a youngster who lived behind Old Kent Road Fire Station.

Emmanuel said: "The passion has always been there, for as long as I can remember.

"I used to watch the firefighters train and I'd always visit my local station, where I'd tell them 'I want to be a firefighter one day'.

"And, I know it's a cliché, but I always watched London's Burning and being based here now at Dockhead Fire Station, which is where they filmed the show, is a dream come true." 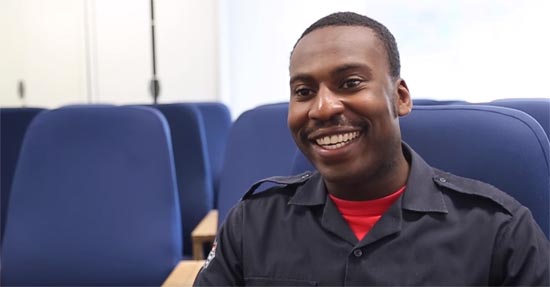 While he was waiting for his opportunity, Emmanuel studied for a degree at university and eventually ended up working in South Africa on behalf of the Government.

"I had to wait for the Brigade to recruit so I continued doing other things. Then when I saw the opportunity I applied and here I am," said Emmanuel.

Emmanuel isn't the only emergency services worker in his family - his brother is a police officer and his sister a nurse.

"We've always had that desire to help the public and that has probably stemmed from my parents.

"They’ve always been people who go out and help people and I guess we want to continue that legacy of doing what we can do to help people and serve the community," said Emmanuel.

Although Emmanuel only joined the Brigade in 2015 he feels ready for anything and continues to learn every day alongside the "amazing crew" he works with.

Emmanuel said: "I've learnt a lot and it hasn’t been that long that I’ve been in and I feel like, bring on the next job I know exactly what to do, these guys have helped me."

What do firefighters do?