History and stories
Historical fires and incidents
The frozen fire at Butler's Wharf, 1931

The frozen fire at Butler's Wharf.

Firefighters have had to be prepared to deliver their fire and rescue services in all kinds of weather conditions – the Butler's Wharf fire of 1931 saw us fight both flames and frozen temperatures.

On 7 March 1931, the weather was particularly challenging. Weather reports read: 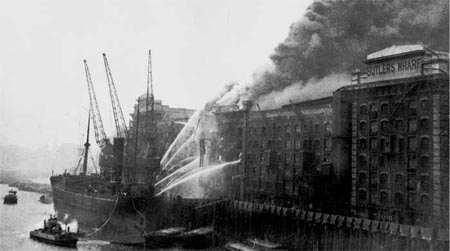 Over at Southwark Fire Station...

In Southwark, at the then headquarters of the Brigade, firefighters read the same forecast, meanwhile, in a warehouse at Butler's Wharf near London Bridge a fire was in its infancy.

The Brigade was called to the fire shortly after 10:00am and around 70 fire engines and more than 1,100 firefighters arrived to see Shad Thames under a cloud of black smoke.

The seven-storey warehouse contained large stocks of tea and rubber and the fire continued to burn all day and night with an acrid smell of burnt rubber lingering in the frozen air.

The fire boats were launched...

The fire boats Alpha and Beta made their way towards the wharf and the firefighters attacked the blaze from all sides - they even used the cargo ship named Teal as a standing platform!

The coldest and biggest fire...

Firefighters managed to confine the fire to a single warehouse but it was a long time before they managed to quench the flames.

An officer on the scene is reported to have said it was "one of the biggest fires the fire brigade had had" and that he didn't think the fire would be "completely extinguished for several days". However, it was the freezing weather that made it so challenging. 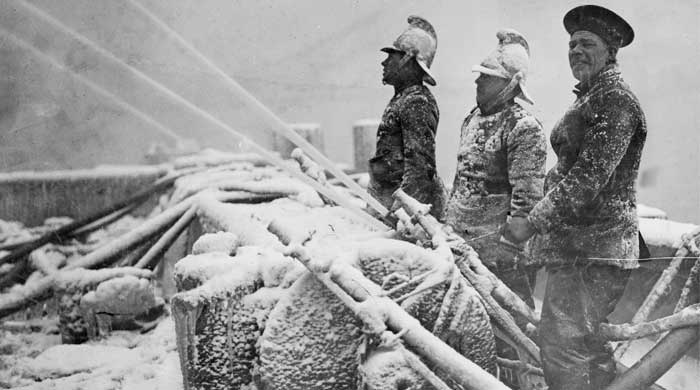 Why was the cold so challenging?

The unbearably cold conditions made it difficult to tackle the fire. Water froze as it ran down the walls and sheets of ice spread across the roads, making any movement potentially hazardous.

The temperature was so low that all branches of hoses had to be wrapped in fabric otherwise it would have been impossible to hold them.

Several firefighters were overcome by fumes, while others suffered from the intense cold – some had to hack away at icicles and hold on to hoses with their bare hands.

Watch a news reel from the time...

At this time, people didn't have televisions at home – instead, they watched what was called a 'newsreel' at the cinema. Here's some footage from the time. You can see snowy London, then the firefighters at work putting out the blaze.

It took the firefighters two days to finally extinguish the blaze and the cost of the damage was estimated at the time to be around... £250,000 ... the severe weather definitely contributed.

Fires and incidents that have shaped history

From unusual fires – like the frozen fire on Butler's Wharf – to fires that shaped the face of London, read more about major historical fires.